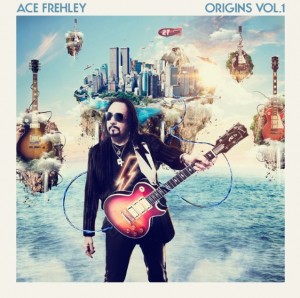 ACE FREHLEY
ORIGINS VOL. 1
To be released on April 15, 2016 (Entertainment One Music)

Review:
Having been ousted from KISS only to watch Gene Simmons and Paul Stanley press forward with former Black ‘N Blue guitarist and then KISS tour manager Tommy Thayer; Ace Frehley’s life was in a tail spin. Since that time, Ace has sobered up, picked himself up and has issued two efforts: Anomaly and Space Invader that have gained favorable reviews from fans and critics alike. In interviews, Ace had mentioned a ‘covers’ album as far back as 2014. At the time, he stated that it would be a collection of KISS re-recordings with special guests.

Well, not so surprising, the covers album has surfaced but in a different incarnation than what Ace initially talked about years ago. The album titled Origins Vol.1 is chock full of guests that range from Lita Ford to Slash to John 5 to Mike McCready to the biggest surprise of them all former bandmate Paul Stanley. Ace selected tracks from bands that he found influential, inspirational or KISS; more on that in a bit.

The core band featured on Origins Vol.1 is Ace Frehley handling most guitars, bass and most of the vocals along with drummer Scott Coogan who handles some of the vocal duties. There are tracks that work brilliantly. “Emerald” fits Ace perfectly. The Slash and Ace trade off during the guitar solo on “Emerald” is one of the highlights of the record. “Fire & Water” with Paul Stanley handing the vocal duties is probably the second best track on the album. Ace tackles The Rolling Stones’ “Street Fighting Man” which fits Ace’s cartoony vocal and swaggering, sloppy guitar playing incredibly well. Other highlights include: Led Zeppelin’s “Bring It On Home,” Jimi Hendrix’s “Spanish Castle Magic,” and Steppenwolf’s “Magic Carpet Ride.”

The number of KISS covers featured within is rather heavy and affects the balance of the album slightly. There are three  KISS covers consisting of “Parasite,” “Rock And Roll Hell” and “Cold Gin.” They’re good renditions. However, this space would have been best for a couple of other covers and frankly would have been less self-serving. The only ‘real dud’ on Origins Vol. 1 is the cringe worthy cover of “Wild Thing.” Lita Ford shares vocal duties with Ace and the result is an uncharismatic, forced and contrived abomination. I can literally envision them in studio saying to one another “I really don’t want to do this, do you?” And it shows throughout this recording. Having said that Origins Vol.1 isn’t necessarily ‘essential’ but it’s by no means a waste of your time — it’s fun to listen to.