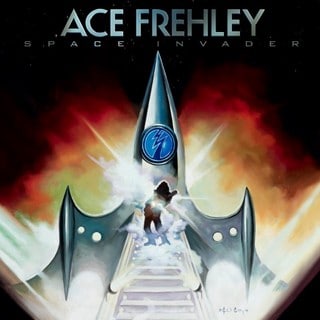 Review:
Everyone has a favorite KISS character, and for me it was always the ‘Spaceman’. You see, the spectacle that is a KISS live show is extremely choreographed, leaving little to no room for spontaneity — and that is why guitarist Ace Frehley was a welcome outsider. As he slumbered across the stage, in raised heels that looked as if they could snap his ankles at any moment, the ‘Spaceman’ often appeared to be in his own world with little regard for posing in a certain place at a predetermined time — he was the renegade in an otherwise perfected live display.

On his latest solo album Space Invader, Ace Frehley proves to lovers, haters and the world at large that he still possesses that certain ‘it factor’ that can’t be taught or bought. Even though the guitar is his weapon of choice, there is something about Frehley‘s vocal delivery that I’ve always enjoyed. He sings in such a nonchalant and carefree manner that it’s almost an afterthought — just something he is being forced to do in order to flesh out the songs. It’s an interesting sound for sure, although over an entire album it becomes a touch repetitious and while listening to Space Invader I begin to wonder if a couple guest vocalists would have made the album even better.

Having said that, Space Invader is undeniably an album that grows on you over time. The classic Ace Frehley sound is on full display during “Space Invader”, the lead-off single “Gimme A Feelin'”, and “Change”, but the guitarist overflows every song with enough riffs to fill a career spanning box-set. I could live without “Past The Milky Way”, “Reckless” and the cover of “The Joker”, a classic rock staple that never did impress me, but those are minor missteps really. My favorites however are the straight-forward hard rocker “What Every Girl Wants” and tracks that push Frehley‘s boundaries such as the mid-tempo “Immortal Pleasures” and “Inside The Vortex”, a trippy and distorted song that I want to hate but can’t get out of my head. The album closes with the seven minute instrumental “Starship” that finds Frehley asking ‘did anybody see George Jetson’ during the final seconds before fading out with a cackling laugh.

Space Invader is as entertaining and flawed as the man whose name graces the cover — and I mean that as a compliment. Ace Frehley has always marched to his own drum, often to the detriment of his own success, but it’s hard to deny that when he straps on a guitar magic happens. Take a journey and explore the galaxies with Space Invader — its one hell of an interesting ride.