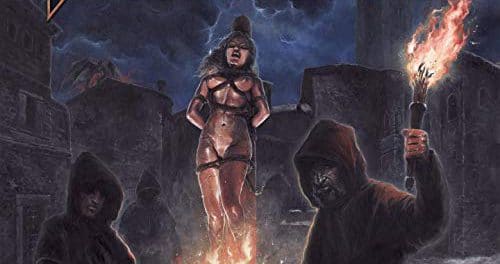 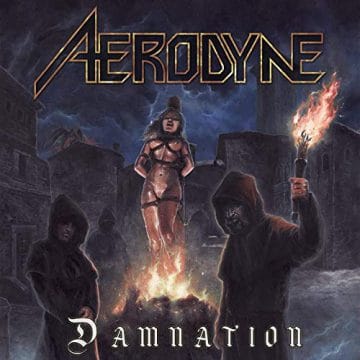 Review:
Back in 2017, Aerodyne released their debut album titled Breaking Free which I thought was a great release even though it didn’t really push any boundaries. In short, it was generically typical of everything that was coming out of Sweden at the time. Aerodyne had the look, the ’80s sound, the big riffs, the gang vocals and an ear friendly lead vocalist, but despite this, there was nothing that set them apart from their countrymen or made them stand out as a must see band who were on the rise.

Fast forward two years and it seems that Aerodyne have undergone a bit of a reshuffle in the personnel department as well as deciding to explore a new musical direction. The most evident change is that the band has now evolved into a five piece. Breaking Free era lead vocalist Daniel Almqvist has relinquished vocal duties to solely play guitar, paving the way for new lead vocalist Marcus Heinonen. In addition, Thomas Berggren has also replaced Timmy Kan on bass. Sometimes multiple personnel changes can hurt the dynamic of a band, resulting in a change of style or sound that ultimately alienates the band’s existing fan base. On this occasion however, Aerodyne have taken these changes on board and have embraced them to produce something that is magical. Sophomore album Damnation is an absolute monster and as we get to the end of 2019, I am going to make the big call and state that this album may be my personal favorite of the year.

The opening track “Hellsiah” is a short instrumental that sounds very inspired by Metallica’s “The Call of Ktulu” and incorporates wind and bell sound effects before the guitars harmonize a cool riff that leads us into the next track. “Out For Blood” starts off with some big power chords and double kick drumming before leading us into a driving riff that subsequently transitions into a verse that gives off a big Judas Priest vibe. Marcus’ vocals sound subdued to start off with but as the song progresses, it doesn’t take long before we get to hear his full range and intensity. The verse vocals after the first chorus sound very much like Rob Halford, with the dueling guitars in the later part of the song only reinforcing the Judas Priest influence.

“Kick It Down” sounds like an out of control freight train hurtling down the tracks ready to demolish everything in its path. It is a juggernaut of a song. The double kick drums sound like thunder and fit perfectly with the fast paced riff, which progressively gives way to power chords in the verses. Things power up again with a simple catchy chorus and a blistering solo, before fooling us into thinking that a slight quiet moment involving just a drum beat and some stop start guitar chords might be the end of the song. But the song takes off again with another great guitar solo and finishes with a chorus topped off with a banshee like scream.

“March Davai” has a mid-tempo drum intro with some simple chugging guitar that is layered with a nice high pitched guitar melody. The song gets a bit fuller when a cool heavy riff kicks in which mimics the high pitched intro melody and provides a nice groove. It’s a nice change of pace and provides some variety to the previous two thundering tracks. The verses chug along simply to ensure that the vocals are the focal point, with the sections in between allowing the heavy riff to periodically do its work. The song also has a great structure and despite not knowing what the song title means, the chorus is still catchy. “Murder In The Rye” this time sees the band channeling a bit of Crashdïet. There are more great riffs leading the way and once again the chorus is catchy even if it does seem to come out of nowhere unexpectedly while the bridge is still in its momentum.

“Under The Black Veil” starts off with a classic metal riff, which everyone would be familiar with, before showcasing the tried and true Aerodyne song formula of transitioning a more complex or driving riff into simplified verse rhythms, before creating bridges and choruses that take the songs to another level of power. Wind and raven cawing sound effects start off “Damnation”, the album’s title track, followed by a roll of thunder and some eerie ringing bells. The great riffs keep coming, transitioning into each other like pieces of a perfect puzzle. It’s another one of my favorites with some great vocal harmonies and a killer arpeggio main riff which also substitutes as the chorus.

“Kill Or Be Killed” borderlines on speed metal with its frantic pace maintained for the duration of the song. Christoffer Almqvist does a great job on drums holding things together whilst only receiving a short respite during a groove orientated section between guitar solos. “The Nihilist” has an Iron Maiden sounding vibe in the introduction and as a song title, I could also imagine Maiden using it for one of their epic tunes. The verses are a much calmer affair this time around compared to the unrelenting tempo of the other songs on the album. A clean arpeggio sound provides a refreshing change and has a slight medieval feel. Vocal delivery during the verses though reminds me of Linkin Park who I am not a fan of but I will admit that the style does sound good here. All signs of calmness are short lived when the chorus kicks in and delivers a powerfully catchy “God is dead” lyric line. Despite the Linkin Park comparison, “The Nihilist” is probably the best song on the album with its many style and tempo transitions. Clocking in at just over six minutes, it is Aerodyne’s epic shining moment.

The final track on the album is “Love, Eternal” which starts off with a calming atmospheric intro layered with some nice melodic blues guitar work. Once again, things quickly shift gear into more great riffs and galloping verses. The highlight of “Love, Eternal” is the great instrumental break which runs for a minute and a half and includes individual guitar solos as well as a dual harmony akin to Iron Maiden.

Where Aerodyne’s debut album Breaking Free sounded more like ’80s hard rock, Damnation sees the band taking the classic heavy metal route and channeling a fair bit of the New Wave of British Heavy Metal with great results. The guitar work is just superb and without focusing on any particular guitar solo, I thought Bergman and Almqvist played off each other to perfection. The recording is also very well done with each instrument having a big in-your-face sound without compromising the other instruments or the delivery of the songs. Sometimes an album comes along where you just know from the very first note of the very first song (even if in this instance it was an instrumental) that you are not going to be able to turn it off without listening to the whole thing. Aerodyne’s Damnation did that for me.

Aerodyne’s “Kick It Down” video: