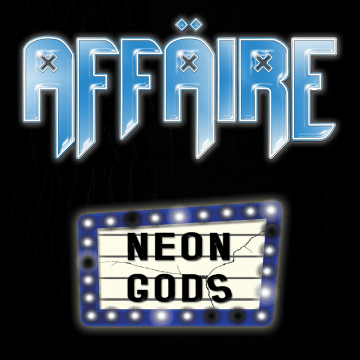 Review:
Affäire are a Portuguese band whose first full length album, 2015’s At First Sight was pegged by Sleaze Roxx editor Olivier as “… Affäire‘s At First Sight is a solid debut album. For reasons that I can’t exactly pinpoint, I feel like the best is yet to come from these sleaze rockers so I am looking forward to hearing what they come up with in the future.”

Well, the future is here. With the exception of Extreme’s Nuno Bettencourt, Venïce Cathouse, Fuzz Drivers, and a scant few others, Portugal is not well known for producing solid sleaze rock bands.  With that said, drummer JP Costanza told me “Living in the western most European capital city takes its toll in terms of distances but when there’s a will there’s a way… Although truth is there is not much of a hard rock bands tradition over here in Portugal, Vice TV recently did a special about a so-called “new and exciting rock scene” growing in our hometown Lisbon – which, of course, did not mention any classic rock band – but we’ll keep doing our best to put non-trendy rock’n’roll on the map so who knows, maybe something good may will come out of this hype for our genre.”

I note the Affäire website also quotes a Sleaze Roxx review, “It’s always a good sign if within a few seconds, you know you are going to like a band. Affäire play the kind of ’80s friendly glam and/or sleaze metal music that is easily what I want to hear.” Sleaze Roxx (Canada)

With the newly released Neon Gods, Affäire look both back and forward, presenting solid ’80s style sleaze for a new generation. JP Costanza told me about choosing a studio and an equipment rack offering an organic sound “…with a “warm ’70s vibe”… combined with a “lethal” or “sharpened” feel to the overall concept according to JP. Much like Crazy Lixx, Hell In The Club, or The Last Vegas, Affäire don’t try to be today’s Crüe, Ratt, or Skid Row.  Instead, they recognize the best of each band, and attempt to expand on those points.  Affäire succeed way more than not.

As I’ve said before, it is difficult to create an overall opinion of a band based on a five song EP…. four songs plus a cover.  And yet, on Neon Gods, after two tracks, you already know what you’re in for. Title track “Neon Gods” and the second song “All Messed Up” are good listens. Aggressive and powerful, as our brand of sleaze is, I can’t call them over-the-top… unlike “The Hitcher” that goes a step beyond. I’m thinking a bit of early Slash and Johnny Crash in the guitar line, with a hint of punk overall. Jumping back to “Shotgun Marriage”, it’s pretty indicative of what you should expect from Affäire.  See the video below.

Finally, wow. What a great Beatles cover of “I Saw Her Standing There.” I’ve heard other bands try this song, for better or worse.  Affäire interpret the song perfectly, and I give credit to singer Dizzy Dice Mike for not trying to hit that high note on “Woooh” in the chorus. I bet he could have, but the omission adds to the unique quality of the song. This is a solid hard rock cover of a classic tune. What’s the point of doing a cover, if you can’t make it your own?

I wish Affäire could have produced another full length album. I’m told by JP that such a thing is in the works, but he also said the EP has gained a life of its own in Europe, and touring is the band’s first priority, bringing its style of rock to the fans. I wish them the best of luck. What they gave me on this five song EP was stylish and impressive, and left me looking for more.

You can preview the song “Neon Gods” and purchase the EP on their website.