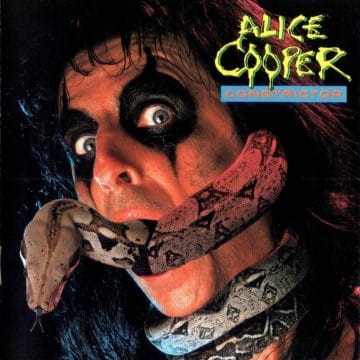 Review:
After what can only be qualified as an abominable album (Dada in 1983) and a few stinkers (Zipper Catches Skin in 1982 and most of Flush The Fashion in 1980) leading to that one, Alice Cooper finally succeeded in getting clean and sober to make one of the all-time great comebacks in rock and roll history with his 1986 release Constrictor. It’s hard to believe that it has already been 30 years since the album was released. Although I have always liked Constrictor, it has actually been more than 25 years since I heard the album until recently for the purpose of this review. One look at some of the songs on Constrictor reminded me how much I liked a lot of them including the amazing chorus on “Life And Death Of The Party” and the faster paced “The World Needs Guts.” Would Constrictor live up to what I imagined it to sound like 25 years later? The answer is yes and no.

I was actually wondering why I had not gone back to Constrictor in the last 25 years and upon revisiting it, I understood a little bit why. The songs on Constrictor sometimes border on pop rock (for example, “Give It Up” and “He’s Back (The Man Behind The Mask)”) and I always gravitated towards the next album Raise Your Fist And Yell, which was heavier. That being said, there is no question that Alice Cooper delivered a strong album in Constrictor and compared to Dada and Zipper Catches Skin, Constrictor is almost like a masterpiece! Teaming up with body building behemoth / guitarist Kane Roberts for the songwriting, Alice Cooper came up with very catchy and memorable ’80s style music that fit right alongside everything that was being released at that time. In essence, it was an incredible feat for Alice Cooper given that he became current again after wallowing in mediocrity creating albums from 1981 to 1983 (except for Special Forces which I really like) that he himself does not remember due to his extensive substance and/or alcohol abuse during that timespan.

In addition to the very physically imposing Roberts, Alice Cooper‘s bandmates for Constrictor consisted of drummer David Rosenberg and bassist Kip Winger — the latter whom went on to achieve fame and fortune on his own with the band bearing his name. Aside from the too simplistic “Simple Disobedience,” Constrictor is just a solid album filled with easy to remember and very enjoyable melodies. It is easily Alice Cooper‘s best and most consistent album since 1975’s Welcome To My Nightmare. There is no doubt that Constrictor and the subsequent tour The Nightmare Returns revitalized Alice Cooper‘s career. The two keys to Alice Cooper‘s comeback were easily the singer getting clean and sober as well as Roberts‘ songwriting contributions, the latter which resulted in an even better album right after in Raise Your Fist And Yell. My favorite tracks on Constrictor are “Teenage Frankestein” with its still very memorable but so simplistic intro lyrics (“I’m the kid on the block / With my head made of rock / And I ain’t got nobody”), “Life And Death Of The Party” with its catchy chorus, and “The Great American Success Story” which I had always thought was called “Back To School” until now due to the chorus portion of the song. “Trick Bag” and “He’s Back (The Man Behind The Mask)” are two other solid tracks and now, I have already named half the songs on the album!

Not many people get a second chance in the music business and after some absolutely dismal albums, which would have put an exclamation mark on the end of the career of many musicians, Alice Cooper rose from the dead and came back arguably stronger than ever. Thirty years later, Alice Cooper is still riding the wave of his comeback touring the world at a pace that would put most other bands to shame and releasing some killer albums from time to time (check out 2005’s Dirty Diamonds).

Alice Cooper‘s “He’s Back (The Man Behind The Mask)” video: