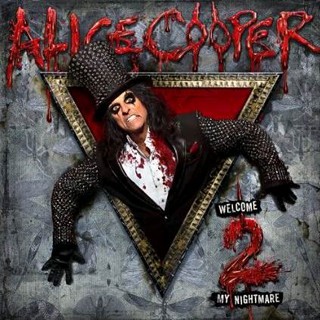 Review:
On his last outing, 2008’s Along Came A Spider, legendary shock-rocker Alice Cooper issued his most consistent album in decades. The storyline might have been a tad too serious, but Alice is at his best when the lyrical content is fun, loose, and with a touch of his trademark sadistic humor. On Along Came A Spider Cooper began to right the ship which had drifted off-course due to inconsistency after his late ’80s pop-metal hangover that plagued albums that followed.

When Alice Cooper set out to record a sequel to the highly successful 1975 classic Welcome To My Nightmare he wanted it to be up to snuff. So on Welcome 2 My Nightmare he made a number of strategic and brilliant moves. For starters he brought back producer Bob Ezrin to man the controls like he did on the original. Next he brought in the surviving members of the pioneering Alice Cooper Group who were recently inducted into the Rock ‘n’ Roll Hall of Fame — Michael Bruce, Dennis Dunaway and Neal Smtih — on three tracks. Also featured on the original Welcome To My Nightmare and making a return for the new nightmare are guitarists Steve Hunter and Dick Wagner.

Welcome 2 My Nightmare is a return to form for Alice Cooper, with hit after hit that range from the classic era of ‘the band’, to his top notch solo work, to the shining moments that have taken place since ’78s From The Inside. The standout tracks on Welcome 2 My Nightmare include “A Runaway Train”, a country inspired rocker that chugs along complete with a blistering twang guitar solo by Vince Gill; “Caffeine”, with its intensely silly and catchy chorus; “Last Man On Earth”, which showcases Alice‘s dazzling homage to vaudeville by way of Tom Waits; the lead-off single and nod to The Rolling Stones, “I’ll Bite Your Face Off”; one of his best ballads ever, “Something To Remember Me By”; and the poppy “What Baby Wants” that finds the seasoned rocker trading lines with Ke$ha.

As a fan of the classic Alice Cooper era, the reunion of Ezrin and Cooper is very special. Welcome 2 My Nightmare is proof that the nightmare is truly back and confirms that Bob Ezrin is to Alice Cooper what Jim Steinman is to Meat Loaf — hopefully the duo continue working together on a few more albums.