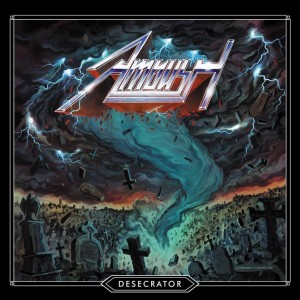 Review:
Beware! Don’t let the album cover for Ambush‘s Desecrator scare you away thinking that this is some sort of death, thrash or black metal album played at an unsavoury breakneck pace (not that there is anything wrong with that but clearly that style of music is not my favorite). Far from it actually. When I stumbled onto the video for Ambush‘s “Southstreet Brotherhood” about ten days ago, I absolutely loved what I heard. Old school New Wave Of British Heavy Metal with lots of melody and the music at an ’80s hair metal pace, what a fucking combination! Although I was still a little hesitant about purchasing Desecrator due to its death metal like cover, I took solace that other great albums such as W.A.S.P.‘s The Headless Children have had odd satanic like covers which didn’t jive with the actual album’s contents and  the song “Southstreet Brotherhood” was just so damn good! By the way, this internal debate only lasted a few seconds…

No need to say that I did end up purchasing Ambush‘s Desecrator and the album has even exceeded my high expectations. Desecrator is the first album that I have heard this year that I love from start to finish and that I simply replay over and over without any hesitation. Yes, I like it that much. Funny enough, I have been compiling votes for the Sleaze Roxx Readers’ Top 20 Albums of 2015 for the last fifteen days and one e-mail entry had four of my top five albums in their top five albums (you know I liked that entry!) and the fifth album on that Sleaze Roxx reader’s entry was Ambush‘s Desecrator. I didn’t think anything of it at the time but upon seeing the e-mail again two days ago, it dawned on me that given our similar musical taste, it is no surprise that we both really like Desecrator.

But enough about how much I like Desecrator. What about the songs themselves? How are they you might think? They are damn good and I can’t get enough. Ambush‘s songs on Desecrator have that old school feel. They are heavy yet melodic and commercially accessible without being commercial or selling out — if that makes sense! Ambush‘s lead singer Oskar Jacobsson‘s voice seems to be a cross between ex-Helloween singer Michael Kiske and Saxon‘s frontman Bill Byford. There is no point in going track by track describing how one song might be better than another. All the songs on Desecrator are very good. You’ll likely hear lots of old school European metal influences including Accept with the guitar riffs on “Master Of The Seas.” My only regret at this time when listening to Ambush‘s Desecrator is that the album would have most likely made the Sleaze Roxx Readers’ Top Ten Albums of 2015 and as it turns out, the record was likely only about fifteen days short of making the cut.

If you like old school NWOBHM with great melodies, Ambush‘s Desecrator is a no brainer.