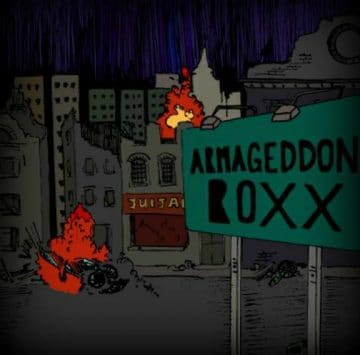 Review:
Technology these days is pretty darn incredible. Take for example the case of Armageddon Roxx. Guitarist Sam Tamberelli wanted to create an album but could not find the appropriate musicians in or near where he lives in Hamilton, Ontario, Canada aside from bassist Dylan Godfrey. Tamberelli did not let that deter him from his goal and he recruited musicians from all over the world — singer Raphael Gazal (Brazil), drummer Mike Vecchione (New York city, New York, USA), keyboardist Marco Gnoatto (Argentina) and singer Chris Catton (Denmark).

Although Armageddon Roxx definitely have an international flavour to them with their line-up, they sound more like a hybrid of American classic rock meets ’80s hard rock with some strong production. The best tracks hands down on this six song debut EP are “Time Bomb Blonde” and “Invisible.” Both tracks provide that you don’t need to complicate things and a good song can be built on a solid guitar riff and some strong vocals while not overcrowding it with too many instruments and ideas. “Time Bomb Blonde” is notable for its guitar work throughout. “Invisible” has a real Van Halen era 5150 guitar feel to it at the beginning and the background vocals often coupled with Raphael Galaz‘s singing work really well. What is interesting about the first two songs is that each track is sung by a different vocalist but I really didn’t notice it until seeing the CD booklet indicating that Chris Catton sang “Time Bomb Blonde” while Galaz handled “Invisible.”

“You Are My Star” slows the pace down but is still enjoyable. Just like “Invisible,” there are seemingly quite a few background vocals layered in with Galaz‘s vocals throughout the song. Tamberelli delivers an awesome guitar solo and that’s probably what I take away the most about the Armageddon Roxx EP. Tamberelli is not a flashy shredder but plays some great guitar throughout the album and has a great sound and tone to his guitar playing. “I’ll Be Waiting” has a Def Leppard Hysteria era feel meets your typical ’80s ballad to it. I can’t say that I am overly enamoured with it but at least I never skip it when I hear it. “Love Charade” is next and although it has a pretty promising guitar riff to start, I find that the verses with Galaz talking at times are lacking quite a bit before the catchier chorus part and another good Tamberelli solo kind of lifts the song. The EP ends on a bit of a whimper with the weakest song “Heartbreaker” available as a bonus track. It starts off with a Dokken “Dream Warriors” like intro with a rather monotone feel throughout, especially during the chorus portion. This time, Tamberelli‘s promising guitar riff didn’t get the build up it warranted.

Overall, the Armageddon Roxx EP is a pretty solid one. The quality of the tracks does vary with “Time Bomb Blonde” and “Invisible” being the best songs by far, and Tamberelli‘s solid but not flashy guitar work being the main highlight throughout the album. I feel the best is yet to come for Tamberelli and Armageddon Roxx but they have both definitely made a good first impression. If you’re interested in purchasing a copy of the Armageddon Roxx EP, you can do so via the band’s Big Cartel page and a portion of the proceeds of the sale will go to the Heart and Stroke Foundation of Canada.

Track #2 from the upcoming debut EP.