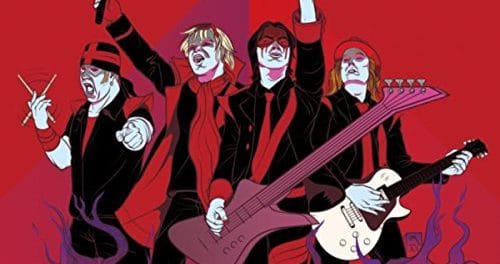 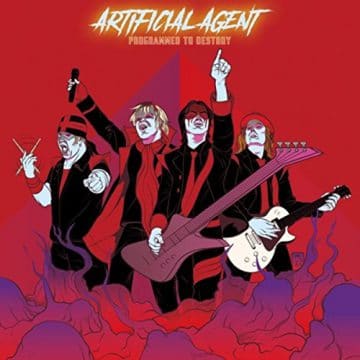 A lot of it has to do with the overall tones of the guitar(s) on the album. The guitar seems to have this clanging modern-ish sound to it which mostly annoys me each time that I listen to Programmed To Destroy. It really detracts me from enjoying a lot of the songs on the record even though most are well crafted and have some good melodies. On their Facebook page, Artificial Agent describe themselves as combining old school (presumably KISS and Mötley Crüe) and new school (presumably Queen Of The Stone Age) influences together. Certainly at the start of the album, there’s just too much new school in the band’s sound for me to get into this album and want to listen to it on a regular basis. Call me old school if you will.

Perhaps the best example of the new school influences not working is on “Begging For Your Blood” with the clanging guitar sounds at times, the uninspiring chorus section and Derek Jendza‘s varying vocal pitches that annoy me more than anything else. Every time I hear that track, I think how annoying the overall sound is. But then I’m hit with “Attention Whore” where the new music influences seem to be much better incorporated and the song simply rocks. I suppose that Artificial Agent are on the border for me. They walk the fine line between old school hair metal and new school modern metal. Sometimes, they hit the nail on the head with a song like “Attention Whore.” Sometimes, they miss the mark completely with a track like “Begging For Your Blood.”

Where Artificial Agent really shine — surprisingly — is with their slower numbers. “I’d Rather Be Blind” is a fantastic song. It reminds me of something that Alice Cooper would have come up with, it has some great melodies and sees singer Derek Jendza sing rather than growl or do whatever he does on those early tracks on the album. “I’d Rather Be Blind” definitely still has some modern metal influences to it but they are really well incorporated into the song and complement rather than hinder the song. “Carousel” reminds me of Danzig with “Mother” at the beginning with Derek Jendza‘s vocals before again going slightly more modern but in a good way. Once again, Artificial Agent are walking that fine line between old school hair metal and new school modern metal but it works well on “Carousel.”

Funny enough, the rest of Programmed To Destroy is rather enjoyable. It’s almost as if Artificial Agent hit their stride by the time you get to “I’d Rather Be Blind” on the record as they incorporate more melodies and lay off a bit on the modern crap. “These Days Are Dangerous” in particular is built on a great guitar riff, really rocks, has a cool guitar solo, some “Hey Hey Hey” portions (which would work rather well live) and some nice melodies. “Torched” walks that fine line between old school and new school again but works more than not. “Your Time Is Up” is another solid rocker and “Tonight You’re A Killer” finishes things off on a positive note.

For me, Programmed To Destroy really picks up from “Attention Whore” onwards. I am still not sure whether it’s because the songs are better from that point forward, there are less modern metal influences from that point or whether my ears have adjusted to the clanging modern metal guitar sounds by that time but whatever the case, from that point forward, the songs are good enough for me to want to revisit the album. Had I only had those first four songs to base my opinion on, I would have likely stated the album was “average” at best due to too many modern metal influences but now overall and over the course of the 12 songs, I find the album is worth listening to.

Artificial Agent‘s “The Devil In A White Dress” song: