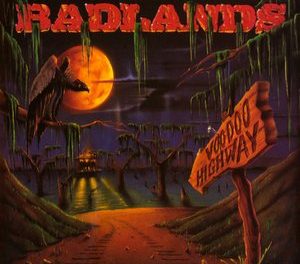 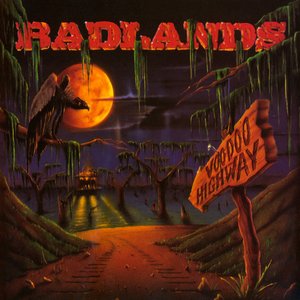 Review:
Badlands were one of the most considerably underrated bands of the late ’80s and early ’90s. I consider their first album a classic in both style and content. It was a solid hard rock offering, providing everything from straight out hair metal (“Dreams In The Dark”) to Zeppelin-inspired blues riffing (“Winter’s Call” and “Devil’s Stomp”). Jake E. Lee put together a stellar lineup, including drummer Eric Singer (KISS, Alice Cooper) and Toronto-born Greg Chaisson on bass, who would later briefly join Lee’s revolving door of characters in Red Dragon Cartel. For Voodoo Highway, Singer would be replaced on drums by Jeff Martin, who previously played with George Lynch and Michael Schenker. Probably the best pick up of the gang was former Black Sabbath lead vocalist Ray Gillen.

Badlands’ debut album hit #57 on the Billboard Hot 100. Respectable, but the record company (Atlantic Records) thought they could do better. Among a raft of internal strife, Atlantic proposed in 1990 that Jake E. Lee co-write with Desmond Child, the hit making machine responsible for some of the greatest late ’80s successes by KISS, Bon Jovi, Areosmith, Alice Cooper, Ratt, etc and so on. Child‘s input was rejected by the band, and Badlands focused on a blues-based hard rock album instead.  Soon after the Voodoo Highway tour was completed, Atlantic dropped Badlands due to poor record sales and a lousy relationship between band members. In December 1993, Ray Gillen died of complications due to AIDS.

But what of Voodoo Highway? Anyone expecting another “Dreams In The Dark” single will be seriously disappointed. It occurs to me that Voodoo Highway is a logical progression though, for a band looking to expand on “Winter’s Call” or “Dancing On The Edge”. It’s expertly written and superbly performed. “Soul Stealer” and “Love Don’t Mean A Thing” kill me every time I hear them. Many a mix tape in the ’90s were made better by their inclusion. The guitar riffs on “Silver Horses” or “Heaven’s Train” show off Lee’s brilliance as a writer and performer.

The album is interspersed with short tracks like the American Steel piece “Voodoo Highway”, the acoustic “Joe’s Blues” and the soulful “In A Dream”. Some might call these tracks filler material — clocking in at roughly two minutes each — but I disagree.  They act as the backdrop for bigger things to come, and sets the tone of the whole album. If it weren’t for “Joe’s Blues”, the opening riff of “Soul Stealer” would not be the boot to the head that it is.

This is darkly shadowed blues rock, and Badlands aren’t ashamed to show it off. I find that even the James Taylor cover “Fire And Rain” is listenable, if only for the flashbacks to an old Simpsons episode which features the original version of this song.  “Sweet dreams and flying machines…in pieces on the ground”.

Voodoo Highway and Badlands in general were high school staples. My friends kind of missed the boat on this band, so I spent many an evening learning the drum tracks note for note and never seeming to get it right. I guess that either speaks to the talent of Jeff Martin, or my lack thereof!

You would be sorely mistaken to assume Red Dragon Cartel is the pinnacle of Jake E. Lee’s career. On the contrary.  Voodoo Highway goes beyond the hair metal to throw back to Led Zeppelin and ’70s era hard rock. The album was seriously overlooked in 1991, and now I find the same album “on sale” via Amazon.com for over $300!