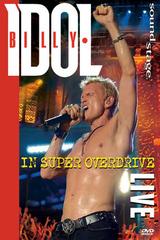 Review:
Even into his early 50’s Billy Idol still has his punk rock swagger and attitude intact, which is more than we can say for his contemporaries. Billy is part Elvis Presley, part Iggy Pop, with some pop-rock thrown in for good measure. The result is the signature sound that can only be pulled off by Billy Idol.

Billy released his strongest effort to date a few years ago entitled The Devil’s Playground and received critical acclaim by critics and fans alike. He’s been touring since then on a yearly basis and his recorded show at Chicago’s Congress Theater is the basis of In Super Overdrive Live. Some of you might have seen this performance on PBS’ Soundstage, which this DVD taken from, and as you know, the folks at Soundstage do a superb job with the series. Idol is joined by his longtime band comprised of Derek Sherinian on keyboards, bassist Stephen McGrath, drummer Brian Tichy (who has since departed for Foreigner) and of course right hand man and co-writer Steve Stevens.

This 70 minute performance features Billy blasting through classics like “Dancing With Myself”, “White Wedding”, and “Rebel Yell.” The real delights here are the new tracks, the stuff that you might have not heard him perform live before, like “Super Overdrive” and “Scream.” In addition there are two new and unreleased tracks that Billy and the guys busted out for this special occasion in “Touch My Love” and “Cry.” Will these tracks surface on a new studio record? Your guess is as good as mine, but they certainly would be worth recording.

The complaint here is that In Super Overdrive Live is fairly short at 12 tracks, omitting several songs played during the original show, and there are no extras. All in all though this release is a good companion piece to the Billy Idol Storytellers DVD that was issued in 2001.