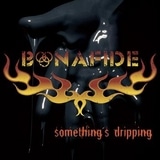 Review:
With Bonafide‘s second CD Something’s Dripping the band shows that Sweden is still the hot-spot for hard rock. Airbourne may be the most popular of the AC/DC inspired groups currently emerging from the underground, but Bonafide deserves just as much respect. Actually, this Swedish four-piece may have even more mainstream appeal than even Airbourne.

To my ears music like this never gets old, because it is delivered from the gut. And while Bonafide may not rock with the furry of Airbourne, they make up for it with a timeless collection of riff-heavy hard rock. Straight out of the gate with “Dirt Bound” the band displays their attitude, and whoever pissed off the band enough to be the brunt of the lyrical content of this song deserves a drink – cranked up at full volume this is one of the best tracks of 2009. But really it is “Fill Your Head With Rock” that could catapult Bonafide into stardom, it has ‘hit’ written all over it.

In all honesty, I couldn’t find a bad song on Something’s Dripping, from beginning to end this CD kicks ass and represents the best of sleaze metal. Even “Straight Shooters”, where vocalist Pontus Snibb trades verses with Crucified Barbara‘s Mia Coldheart, works to perfection. One thing Bonafide has learned in their short period of time is that not everything has to be delivered at 100 miles-per-hour, but that isn’t to say they can’t. “Dog” for instance is a great boot-stomper that sends you back in time to the dirty side of late 80s metal. The vocals throughout the disc have just the right amount of grit and the rest of the band delivers AC/DC influenced boogie with ease while the guitars themselves often have a Helix Wild In The Streets feel to them.

Something’s Dripping sounds huge and deserves to be huge. If AC/DC is sounding a bit stale to you these days then Bonafide is the perfect remedy. This is pure 100% crotch driven hard rock, and a must have for anyone that enjoys simplistic perfection. The definition of bona fide is authentic and genuine, judging by this release these guys couldn’t have come up with a better name!