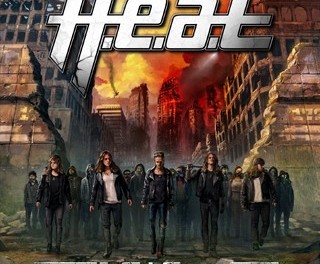 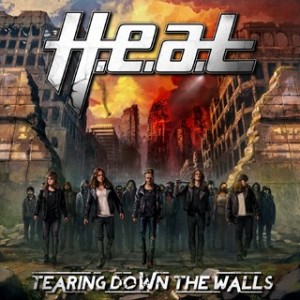 Review:
Although I have written several CD reviews for Sleaze Roxx over the last few years, I don’t often buy records simply based on others’ opinions unless I know that I have compatible musical tastes with the reviewer in question. However, when albums consistently get touted as “best of the year”, I figure that a strong majority can’t be completely wrong — and even if I may not agree with the lofty analysis, odds are the album will be a pretty good one.

This is exactly the case with H.E.A.T‘s latest offering Tearing Down The Walls. With so many grumblings that it is 2014’s album of the year I felt compelled to buy the Swedish band’s fourth studio release despite the fact I hadn’t heard a song from it and really have never been familiar with the group (aside from knowing that they switched lead singers a couple of years ago and now have Swedish Idol winner Erik Gronwall fronting the band). Not knowing much about H.E.A.T, a red flag popped up when I was reviewing the CD booklet and saw that there was only one guitarist (Eric Rivers) and one keyboardist (Jona Tee) in the band — quite likely meaning a commercial, polished and keyboard laced sound. I have heard too many AOR records that miss the mark with their watered down keyboard infested music. There are of course some bands that can successfully pull off having a full-time keyboardist, such as Masterplan (particularly on their first two releases) — and as I quickly found out, H.E.A.T.

After only one listen of Tearing Down The Walls, there was no question in my mind that the members of H.E.A.T are fantastic musicians that have mastered the art of melodic rock. I already knew that H.E.A.T had an amazing singer (you’ve got to have talent to win those various Idol competitions) but hearing a full record with Gronwall handling vocals confirms that this guy has got to be one of the best young hard rock singers out there. I was also impressed with the variety of songs on the record, from the beautiful ballad “All The Nights” to the catchy “A Shot At Redemption” — which I’m sure was a no brainer as the first single.

As anticipated, the sound on Tearing Down The Walls is quite polished — but it works! There are so many great songs on the album, from “A Shot At Redemption” to “Mannequin Show” to “Enemy In Me” — there isn’t a bad song to be found and there is no need to say that I will be purchasing whatever else H.E.A.T has to offer in the very near future.