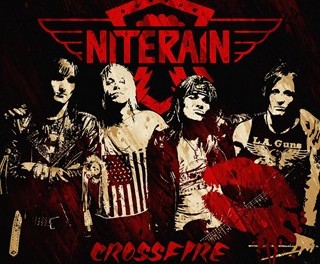 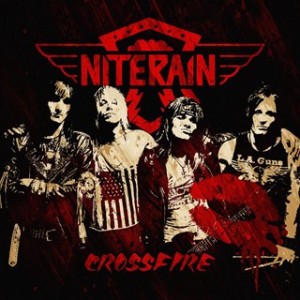 Review:
There is certainly no shortage of quality hard rock and heavy metal bands hailing from Europe, but some acts shine more than others, and NiteRain is among the cream that rises to the top.

NiteRain is a Norwegian outfit who really nailed it on their debut effort Crossfire. Sounding much more mature than a debut album, Crossfire boasts a polished sound alongside clever lyrics and song structures that demand a place in the current hard rock scene. The album also showcases monster riffs, infectious hooks, and strong melodies delivered with the confidence of an experienced band. NiteRain‘s brand of hard rock certainly has it’s influences — in the form of 80’s hard/melodic rock from the likes of Motley Crue and Van Halen. In fact, during some of the songs I hear a “Kickstart My Heart” vibe, while lead vocalist Sebastian Tvedtnaes‘ tenor growl is within spitting distance of Vince Neil‘s vocal range.

All of the compositions on Crossfire are up tempo — there’s not a single sleeper nor throw-away filler. Heck there’s not even a ballad. One strong element of NiteRain‘s songs is the effective use of backup vocals that complement their catchy choruses and melodic song structure quite well. Interestingly, we hear not so much of a sleaze-rock gang vocal sound as much as a Blue Oyster Cult vibe — a nice original touch by a new band with influences from mixed roots.

By far, most of the compositions on Crossfire are hard rockers laced with pure fun including tongue-in-cheek lyrics such as “Make My Day’s” ‘Hey hey hey, don’t make daddy wait, I got my beer and I got my lady, c’mon make my day’, the oh so fun “Somebody Get Me A Doctor”, and “Bad Girl” yielding ‘I did it to her once she said do it again, I don’t want a boy I want a Superman, she slapped me in the face and kicked me out the door, screaming don’t come back till you’re ready for more’.

Crossfire is a well put together album fitting of loud parties, faster cars and boisterous times — give it a listen and savor the joys of trashy, unapologetically decadent fun. If you become addicted to Crossfire, then consider NiteRain to be your dealer.