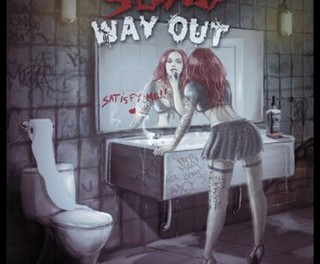 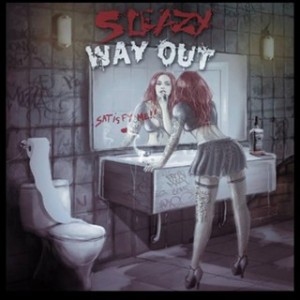 SLEAZY WAY OUT
SATISFY ME
Released on February 13, 2015 (Sleazy Way Out)

Review:
In 2015, it’s becoming increasingly rare to find straight-up rock bands hailing from Canada or the USA, instead most of the talent pool is gravitating towards modern folk or electronic dance music. That’s why I was delighted to find this gem of a band rooted in Montreal, Canada. With the name Sleazy Way Out, and an album called Satisfy Me that features cover artwork of a girl in a mini skirt putting on lipstick in a dirty washroom, it quickly becomes crystal clear what genre this group are catering to.

On first listen to Satisfy Me, one might think they have stumbled across a long-lost Cinderella recording — but no, this is brand new. That vocal sound you’re hearing is about as close to a second coming of Tom Keifer as I’ve ever heard. Sleazy Way Out lead vocalist Stacey Sleaze is a true tenor, but not in the usual shrill manor of most tenor rock vocalists, instead he has that full bodied growl that only Keifer could completely pull off.

There are some noteworthy points to Sleazy Way Out‘s sound, and the songwriting is simple straight-ahead fun driving hard rock — no fillers nor ballads are to be found on Satisfy Me. I might also add that the band’s songs contain arguably better hooks than most other new bands of the ‘sleaze’ genre. Guitar fans will find plenty of tasteful chops to steal and the solid drumbeats and bass lines are slammin’. Most notable are the songs “Born To Booze”, “Hotter Than Fire” and “Voodoo Queen” that formulate the lethal mix of pop-metal with a bluesy punch reminiscent of latter Cinderella.

Sleazy Way Out‘s future may be bright, having already opened for established acts such as Crashdiet, Faster Pussycat and John Corabi. Fans of ’80s rock will eat Satisfy Me up… and crank it up.