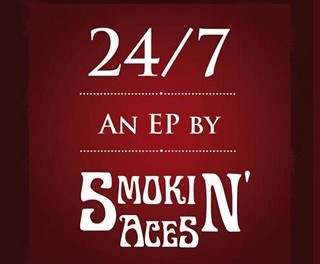 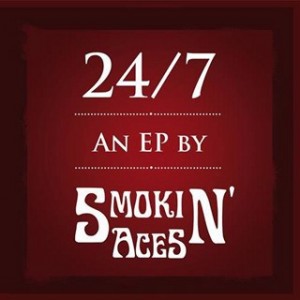 Review:
Having a bad day? The remedy might be quite simple, just stick the Smokin’ Aces EP into your player and press play. The magic that happens is instantaneous as the air is filled with soulful and infectious fun rock.

Just when the home-country sleaze kings Santa Cruz turned their musical sites to thrash and metal-core, we have yet another new Finnish band come out of left field and knock it out of the park when nobody was looking. The Smokin’ Aces‘ sound is fresh, heavy and powerful — drawing influences from Guns N’ Roses and Skid Row‘s debut with happy melodic overtones that get your foot tapping and have you humming along before you know it.

There are a number of rockers exploring a plethora of styles on 24/7, and every one does its job perfectly. “The Ruckus” is a loud GN’R-soaked, slightly bluesy, metal anthem that makes for a nice opener. The title track is the shining star on this EP, combining pop-metal with loads of hooks and fun to keep you coming back for more, while “Hooked On You” is another extremely catchy and rowdy anthem. The EP is full of shredding, gang vocals and a pounding bass and drum section with frontman Anthony Dawoud‘s powerful and ferocious raspy pipes rounding out Smokin’ Aces songs quite nicely.

This is raw, aggressive barroom rock with just enough of a bluesy edge. The songwriting skills out of the gate already prove that this young band has talent oozing from their pores, and we’re expecting big things from Smokin’ Aces in the years to come. With this blistering release, Smokin’ Aces prove from the get go that they mean business.