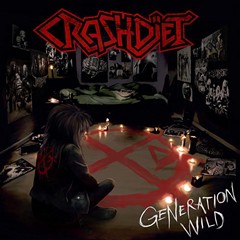 After the unnecessary intro called “442” the band go full throttle with “Armageddon”, in my opinion the best song on the new CD. That song is followed by the strong “So Alive” and their first single, the gold-selling “Generation Wild”. After the single Crashdiet present to us another hard rocker in “Rebel”, before they slow down for “Save Her”, which sounds very modern so it may not appeal to the hardcore glammers looking for another “It’s A Miracle” or “Out Of Line”. After that song they kick into overdrive with “Down With The Dust”, a fast and furious punk-rock song, before going straight into the Skid Row-ish “Native Nature” which doesn’t sound very much like Crashdiet, but it delivers and is turning into a fan favorite. “Chemical” is the next one, and it has the best chorus on the entire disc, but what this song lacks is the stronger bridge to turn it into the ultimate Crashdiet song. The “feel good chemical” part is just weak on this track and drags the song down, therefore I don’t think it should be there. “Bound To Fall” is a great hard rock tune that leads into “Beautiful Pain”, the last song on Generation Wild, which sadly may be the weakest song on the CD, and definitely is the wrong way to end this great album.

Crashdiet have made a great CD with Generation Wild, no doubt about it — but I think that, while the choruses on every song are fantastic, that sometimes the verses or bridges needed more work. Even though a song should climax in its refrain or chorus, and it certainly does on this CD, other parts of the song should be just as catchy or interesting — not that they aren’t on Generation Wild, but at times they could be better.

Generation Wild is a great CD with lots of killer tracks, “Armageddon” and “Chemical” are my personal favorites, but the album does have some flaws (which I mentioned previously). I certainly recommend this disc to every hard rock fan, because I guarantee that you will be satisfied.