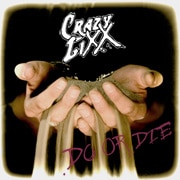 CRAZY LIXX
DO OR DIE
Released in 2005 (Crazy Lixx)

Review:
I knew these guys sounded familiar, turns out the track “Death Row” appeared on Perris Record’s Hollywood Hairspray Vol. 3. But that was a couple years ago now, and what do we have from the band here? Only one new song! If the music wasn’t so damn good I might be a bit pissed off about that.

However, like so many of their fellow Swedish sleaze cohorts, Crazy Lixx knows how to deliver the goods. “Do Or Die” is a super-charged rock anthem with a chorus that screams classic Twisted Sister – the louder you play this one the better. The volume needs to be cranked on “Death Row” as well, but it is more of a straight-up sleaze tune, with a cool chorus of “lovin’ you is like the death row honey”.

I hope over two years time that the band has managed to record more material then these two songs, because I would love to hear more from them. But as it is, this two song single will have to do. I recommend checking them out right away!