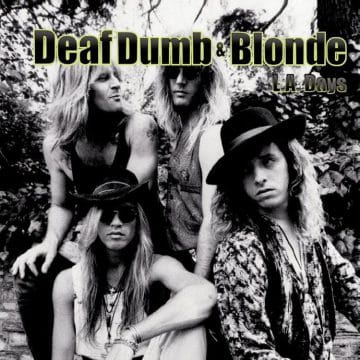 Review:
Wow! Another long lost Tora Tora album. I was aware of Tora Tora‘s long lost follow-up album to Wild America that was shelved for years until their album Revolution Day was released in 2011. Had I not known about the album title L.A. Days (Tora Tora hail from Memphis, Tennessee) and the name of the band (Deaf Dumb & Blonde) playing on this album, I would have thought for sure that Tora Tora had unearthed some more long lost tracks, and this time with better production than the demo albums that surfaced in 2009 such as Before & After.

As it turns out, Deaf Dumb & Blonde are their own entity but the band’s groove and singer Troy Wheeler‘s vocals really remind me of Tora Tora in a great way. I am not sure how much influence that Tora Tora had on Deaf Dumb & Blonde but it’s worth noting that Tora Tora had one album under their belt — Surprise Attack (2009) — in or about the time that Deaf Dumb & Blonde formed in 1991. There seems no question at the beginning of L.A. Days that Deaf Dumb & Blonde have ripped off the opening of Mötley Crüe‘s classic “Dr. Feelgood” but luckily, by the time you put two and two together, the band branches into its brand of sleazy bluesy rock n’ roll and never looks back. The first four tracks are absolutely stellar! It takes me back exactly to that late ’80s to early ’90s music era of gritty rock n’ roll highlighted by the singer’s raspy delivery.

I love the pace of Deaf Dumb & Blonde‘s songs. “Down And Dirty” is played at mid tempo pace but sounds heavy and no pun intended, dirty! Wheeler‘s vocal delivery is close to perfect in my book. No, he won’t get any best vocalist award but his voice has emotion, attitude and balls. “Talk About You” sees Wheeler surprisingly sounding like Living Colour‘s powerhouse singer Corey Glover during the verse portion of the songs. No need to say that I love Glover‘s voice! “Dreamer” is a faster paced song that may well have you singing along during the chorus portion. “Heaven’s Trail” sees Deaf Dumb & Blonde slow things down with Wheeler‘s voice shining almost by himself before the song launches into another mid tempo rocker. The last three studio tracks are all good too although not quite as strong as the first four songs. Wheeler‘s vocals on “Love Thing” remind me of the singing from Mach22‘s frontman Lamont Caldwell who also sounds a lot like Living Colour‘s Corey Glover. Guitarist Dave Letko‘s solo on “Love Thing” is a thing of beauty. “That’s The Way Love Goes” has a cool groove and some nice group harmonies on the chorus portion.

The one downer with L.A. Days is the bonus tracks’ recording quality. I get that a record company and/or band wants to add as much value as possible to a release such as this. In this case, there are two bonus tracks, which are live renditions of “Down And Dirty” (which is also the first song on this album) and “Here’s Mud In Your Eye” done at FM Station / Rock TV in the early ’90s. Unfortunately, the sound or recording of these two live tracks is quite subpar and I find a noticeable drop in quality compared to the seven first songs. Sure, the two bonus live tracks essentially take the album from EP status to full-length status but they could have easily been left out. It would have been nice to have a studio version of “Here’s Mud In Your Eye” but I guess that wasn’t meant to be. Now, I have to consider whether to rate Deaf Dumb & Blonde‘s L.A. Days as one of the best releases of the year despite the two poor sounding live tracks at the end of the album… Pick up this album if you can. It’s a damn good one!