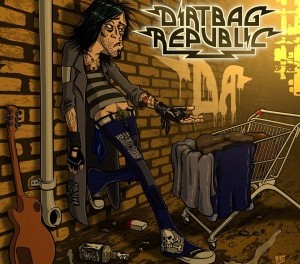 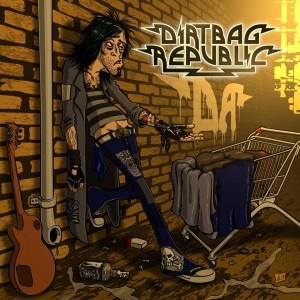 Review:
Bringing the fun and swagger back to rock n’ roll — that is what I think of when I listen to Dirtbag Republic‘s self-titled debut album. Dirtbag Republic starts off fast and strong, and simply never lets up. If you like the first track “Can You Feel It” — and what is not to like about a sleazy rocker with a big guitar sound and Hanoi Rocks like swagger — odds are you’re going to like every track on the album because every track is similar in terms of being a straight forward sleazy dirty rocker. In other words, if you like one song on Dirtbag Republic, you’ll like them all!

Although Dirtbag Republic‘s self-titled album is a debut album, the men behind the record are not baby faces by any means to the sleaze rock genre. The architects behind the Dirtbag Republic album are none other than old friends and former Grandma Moses bandmates from more than twenty years back, drummer / lead vocalist Sandy Hazard and guitarist Mick Wood. Accordingly, although Dirtbag Republic‘s self-titled album may be a “debut” album, it is one created by two guys that obviously have had a lot of chemistry in years past and who know what this genre of music is all about. I will confess that my one initial hang up with Dirtbag Republic was that Hazard‘s vocal range is somewhat limited and sounds a bit repetitive at times. That being said, sleaze type bands are not exactly known for their opera like type singing so Hazard‘s somewhat limited vocal delivery fits in well with the down and dirty sound that the Hazard and Wood duo plus session players deliver on Dirtbag Republic.

Funny enough, the three bands that come to my mind when listening to Dirtbag Republic‘s self-titled debut album are The Rolling Stones, Hanoi Rocks and the New York Dolls, and all three are mentioned by Dirtbag Republic in their Facebook bio, which I had posted in a prior Sleaze Roxx news article but which content I had admittedly forgotten about! My favorite tracks on Dirtbag Republic are the opening track “Can You Feel It” with its grab you by the balls in your face attitude, the piano filled “Give Me A Taste” with its cool guitar solo, the fast paced “Exits & Daggers” and the peppy and catchy tracks “I Have Nothing” and “Leave The Lights On.” Man, I just named almost half the songs and I am leaving some out! Truth be told, I really like all the songs and in particular the first three tracks. Dirtbag Republic is just one seamless listening pleasure from start to end assuming that you enjoy Hazard‘s singing. I can’t end this album review without giving a very big nod to Mick Wood whose old school sleaze rock guitar sound and riffs are just so cool and really the foundation to the Dirtbag Republic album’s greatness.

If you like sleaze type rock, picking up Dirtbag Republic‘s debut album is a no brainer — end of story.