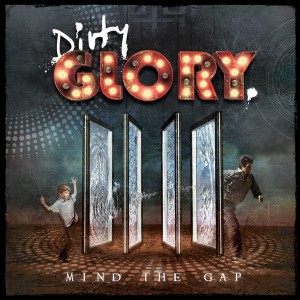 Review:
My theory is that the UK and the USA produced a large amount, if not most, of the hard rock and heavy metal groups from the ’70s and ’80s but it will be other countries such as Sweden and now Finland, Italy, Brazil and even Hungary who might not have been initially known for producing great hard rock and heavy metal groups and from where most of the new acts that will breakthrough will be emanating from. Whether I am right or wrong with my analysis is probably irrelevant but there are certainly a lot of great new bands that seem to be coming out of different countries these days!

Dirty Glory emanate from Brazil and will take you back to the hooks and melodies of the ’80s hair metal era while adding their own modern touches here and there such as on the song “Mr. Jack.” It’s kind of a shame that Dirty Glory were not around back in the ’80s because they would have probably fit right in and experienced some success during that glory period. Aside from the ballads “Beyond Time” and “The Sentence” that I am not crazy of and find on the dull side, the rest of the songs on Mind The Gap are entertaining, sometimes quite catchy and a trip down memory lane for a good portion of them. There are a couple of tracks that always seem to standout when I am listening to Mind The Gap and they are “20 Years Of Moving Out” and “Fire.” Each track has a really catchy chorus with nice melodies that make them easy to remember. I am a bit puzzled by the songs that the group chose for their videos given that the two catchiest tracks have been bypassed for two of the weakest tracks on the album — namely “Mr. Jack” and the ballad “Every Time I Think About You.”

Although I have listened to Mind The Gap numerous times and enjoy most of the songs, something seems to be missing for me each time I listen to the album. I think it’s because I feel that the songs aren’t that original and I have heard them before somewhere at some point in the past. Nevertheless, if you like ’80s glam and sleaze metal, checking out Dirty Glory is a worthwhile endeavour.

Dirty Glory – Every Time I Think About You (Official Video)