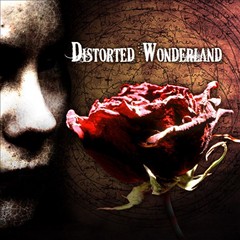 Review:
When Overnight Sensation members Olof Lindgren and Axel Karlsson sang backup vocals on Hardcore Superstar‘s 2005 self-titled album they got the urge to move in that same sleazy direction. Starting out as a side-project, Distorted Wonderland quickly became the musician’s sole focus when Overnight Sensation disbanded. Seeing as Hardcore Superstar was the catalyst for this band’s creation it comes as no surprise that the formula for success is very similar between the two.

Mixing the sounds of Hardcore Superstar with a vocal delivery that is a cross between Wednesday 13 and Chris Laney may not make for the most original formula… but this is damn good! The self-titled CD from this fresh Swedish band kicks off with the first single “Raised On Rock N’ Roll”, an excellent chugging rocker that shows Distorted Wonderland isn’t content on being second-rate sleaze merchants. Following that is “Losing It” another great track that contains a hint of Quiet Riot‘s “The Wild And The Young” during the pre-chorus but packs a much harder punch. The best is yet to come though!

“Slave Of My Desire” is a heavy track with huge harmonies during the chorus but even better yet are the full-throttle adrenaline laced “In For A Thrill” and the metalized “Never Had Nothing”. The later track in particular shows exactly what Distorted Wonderland are capable of — perfectly mixing heavy metal riffs with melodic choruses that results in a huge sound. “Tangerine” ends this sensational debut with rapid-fire drums/riffs and yet another unforgettable chorus.

Is Distorted Wonderland better than Hardcore Superstar and Crashdiet? That is debatable, but they definitely deserve the same praise that those bands receive. People always talk about leaving the best till last, and with 2010 wrapping up Distorted Wonderland is pretty much last and without a doubt one of the best.