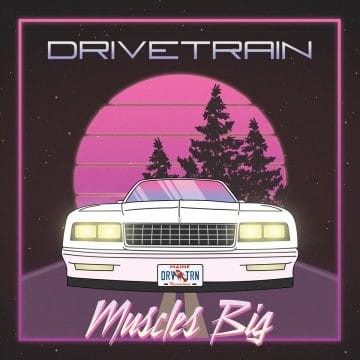 Review:
Coming up with the #10 album for the Sleaze Roxx’s Top Ten Albums of 2018 was quite the challenge and one record that was clearly in the mix was Drivetrain‘s debut album Muscles Big, which is one of the most intense releases of 2018. Drivetrain seemingly follow no rules on their debut album except deliver kick ass rock n’ roll, lots of attitude and at times a little bit of comic relief. The guitar work from lead vocalist / guitarist Kevin Beling and guitarist Butch Fabish is absolutely stupendous but not in an Eddie Van Halen wizardry like fashion but in early Ace Frehley like reckless abandon. Not since 21st Century Goliath‘s debut album Radio Destroyer in 2012 have I heard such a raw, intense and furious record.

I had mentioned some comic relief from Drivetrain and it comes with a few of the intros to some of the songs. For instance, the opening track “Muscles Big” opens with the following dialogue: “Hey! What’s up bro? Nice ride Holmes! It reminds me of the one me and your girl got busy in back in the day.” Nice! From then on, it’s full throttle as a heavy guitar riff leads to Beling‘s rough and almost spoken vocals, and a few out of the blue guitar solos before Beling screams out the remaining vocal passages towards the end of the song. “Carry That Cross” is more of the same with Beling talking his way and one might say even kind of rapping through the song during the verses interceded by some heavy ass guitar riffs. There’s a real cool groove to the song. The guitar solo is reckless and has a real live feel to it. Towards the end of the song, it feels like Beling is really straining to belt out the vocals but it’s still enjoyable. The song then suddenly ends and it’s time for “Mortal Coil” and more of the attitude filled rock that Drivetrain seem very adept at delivering. With each song comes better and better background vocals. With each song comes an even more early Frehley like sloppy yet enjoyable guitar solo.

“Bottle Up” slows things down a bit but still has tons of attitude with some cool guitar riffs. Although I always enjoy the track, it’s not quite as strong as the first three. “Cajun Queen” feels like some kind of monster is creeping up on as you listen to the track. Perhaps the most surprising part of Drivetrain‘s debut album Muscles Big is that the best tracks are buried towards the end of the album. “The Tribe” starts off quite slowly with really nothing happening for the first one minute and ten seconds before a few haunting “Wo oh oh oh” can be heard and Beling invites everyone to “Come and join the tribe!” The song builds and builds, and simply gets more powerful and intense as it goes along with some killer but sloppy guitar solos from time to time. At around the three minute and 30 second mark, “The Tribe” goes into overdrive with some parts that will really remind you of early KISS before the familiar “Wo oh oh oh” chants creep back in.

“Medicine Ball” is interesting because the song starts off almost like what you might expect at the end of a song except it’s the beginning. That track also drips with attitude and really follows “The Tribe” quite well. It’s almost as if “Medicine Ball” is part of “The Tribe.” The closing track has a funny intro with presumably Beling telling the audience to put down their x-box, pick up a book and listen in at a history lesson. Eventually, Beling screams “Everybody loves that British pussy!” and the song launches before getting suddenly very heavy towards the end and then abruptly ending.

Drivetrain‘s Muscles Big has really taken me by surprise. Every time that I put it on, I seem to enjoy it even more. The songs are powerful, intense and raw, and I would absolutely love to hear these tracks in a live setting.