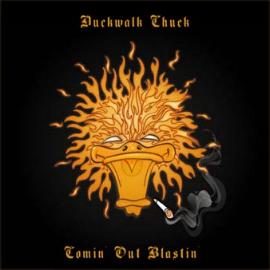 Review:
Duckwalk Chuck has to be one of the strangest band names I’ve heard since Raging Slab or Rhino Bucket, and like the later these Norwegians have grown up on a steady diet of AC/DC three chord boogie. Imagine Broken Teeth with vocals that rumble more then they screech and you will have an idea of what Duckwalk Chuck sound like.

The majority of songs here are completely interchangeable with their gruff guttural vocals, full steam ahead rhythm section and the aforementioned AC/DC stomp. Even though as a whole this album is ‘too much of the same’, there are some damn fine cuts. “GTA” for instance is a fine example of pedal-to-the-metal boogie, and the engine revving sound effects add that little bit extra. “Prime Bitch Rocker” has some cool sound effects as well, and it is a very aggressive rock song – the beat is furious and never lets up.

Musically “Loudcifer” and “Boogie Beast” remind me of Ballbreaker era AC/DC, both sound identical to the type of riffs they would create. “Bikes & Broads” is one of the best songs here because it has a memorable guitar line rolling throughout it. Even the bad songs on Comin’ Out Blastin’ are pretty good, it’s just a case of them sounding too much alike.

Comin’ Out Blastin’ could stand a touch of diversity, but in this day and age of American Idol wannabes screaming and squawking to show off their range, it is refreshing to hear someone belt out attitude driven rock with the focus being the band and music as opposed to self promotion. These oddly named rockers have a bright future in the land of sleaze, and are the type of band that goes great with massive amounts of alcohol. Sound samples and purchase info can be found at www.duckwalk.no.