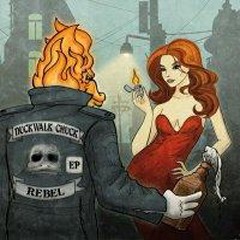 Production:
Produced by Duckwalk Chuck and Even Gramstad.

Review:
It’s been six years since I first heard of the oddly named Duckwalk Chuck, and there have been many changes within the band since that time. When I heard that the Norwegians had released a couple albums since 2004’s Comin’ Out Blastin’ I had to check them out — but finding their CDs is no easy task. After some searching I finally got a hold of the group’s newest release Rebel.

Bassist Arvid Thorsen has taken over on vocals since I last heard Duckwalk Chuck, and while he isn’t as gruff as the band’s previous frontman his drunken slur is the perfect companion to the band’s brand of AC/DC inspired barroom boogie. The remaining members put their heads down and conjure up classic AC/DC riffs and rhythms at will — it isn’t a unique strategy, but one that has worked well for similar artists such as Dirty Looks, Rhino Bucket and Sideburn. While the outcome may be predictable, it doesn’t change the fact that songs such as “Dance Baby, Dance”, “Red Hot Woman” and “Rock’n’roll Hangout” pack one hell of a punch. “Rock’n’roll Hangout” succeeds with its Ted Nugent inspired riff while “Dirty Love” has the feel of Jetboy‘s “Feel The Shake” mixed with Dogs D’amour styled vocals. But it is the musicianship of the band that really impresses on Rebel as the guitars wail with AC/DC attitude and the rhythm section kicks in a steady beat from start to finish.

Duckwalk Chuck never slow things down, yet they don’t exactly explode either — instead they play within the middle ground, a group tailor made for playing rough and tumble bars in relative obscurity. The biggest problem with Duckwalk Chuck is their lack of promotional skills. No one is going to know about the band if press releases are non-existent, or if trying to find their CDs requires hiring a talented private detective. Maybe that is how Duckwalk Chuck wants it though… to be a band that plays in the trenches for people willing to put in the effort to discover them? Now that you’ve heard of Duckwalk Chuck your best bet in getting this EP would be to contact the band through their MySpace page.