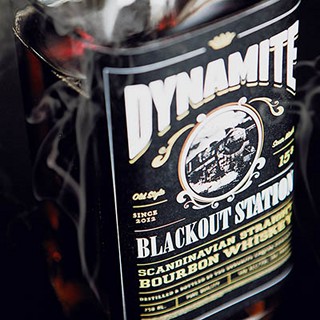 Production:
Mixed and mastered by Mankan Sedenberg and Maxe Axelsson.

Review:
The boys from Vaxjo, Sweden have returned rather quickly with their sophomore effort Blackout Station, and it doesn’t disappoint. Back also is their shameless ode to the classic Bon Scott era AC/DC sound full of shrill vocals and catchy guitar riffs. It actually sounds like 1977 all over again (no knock on that other AC/DC sounding band ’77) minus Angus Young — and that’s not necessarily a bad thing as Dynamite‘s songs are still full of catchy solos and musically hold up well.

Released almost a year to the day after their debut Lock N Load, Blackout Station kicks off with its title track consisting of a locomotive train hitting the tracks, guitars slowly working their way into the main riff of the song and (of course) no lyrics, but an obligatory scream from lead vocalist Mattis Karlsson. The sheer notes this guy can hit would make Bon Scott smile and other tenors like Geddy Lee and Perry Farrell envious.

This album is pure classic rock ‘n’ roll marinated with whiskey and served with a heavy dose of blues. Pretty much all the songs follow this formula but the ones that stick out as particularly strong are the sing-along anthem “Hail Rock N’ Roll”, where I could easily hear an arena of 20,000 fans roar the chorus “Now I know, Hey rock n’ roll”, and the fast paced “Hard To Please” and “Burn It Down”, which are pure infectious fun.

I would love to see what Dynamite could offer in a live show setting, but unfortunately Europe will most likely be the only continent to have this band play within it. In a Sleaze Roxx review of their first full-length, my colleague Olivier claimed Dynamite offers nothing original, but to simply call the Swedish rocker’s debut an early AC/DC copycat would be unfair — and I agree. I’m just happy bands like this still exist and that this brand of rock still appeals to the masses. What’s done is done, and what Dynamite has done with Blackout Station is damn good.