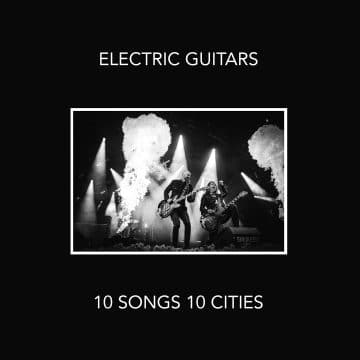 Review:
In the spring of 2018, Søren Andersen and Mika Vandborg’s Electric Guitars set out to professionally record each show on their European tour.  The result is 10 Songs 10 Cities, and the album captures the personality, the passion, and the incredible talent of these two Danish axemen. Sleaze Roxx reviewed the previous two studio albums, 2016’s String Fever and the 2017 Rock n Roll Radio. I have been in love with the band for a few years simply because of their dedication to riff-rock and pure musicianship. Put it another way, they write killer / catchy hard rock songs that are hard to get out of your head.

Don’t believe me?  Check out the melodic and heavy “Swagman”, the quirky “Thinner the Eyebrows, the Crazier the Woman”, or my personal favourite driving song “False Flag Operation”. The latter track evokes memories of wide-open ’80s arena rock that starts with an amazing riff and does not stop for four and a half minutes. All three of these songs are reworked live on 10 Songs 10 Cities to make them sound even better. In fact, there were a couple of songs like “Lucy Glow” and “Back to You” I wasn’t crazy about as album cuts, but really pop out live.

I could have done without “The Man from Outer Space”, and the jury is still out on whether the slowed down, almost ballad-like version of “Day Off” works. But oh my, that dual guitar breakdown during “White Flag” is something I repeatedly scanned back to. Many live albums are so heavily produced it really doesn’t matter if the final output is an accurate representation of the band’s performances. Overdubs, vocal fixes, excessive crowd noise… To my ears, they all detract from something that should be pure. I detected very little post-prod on 10 Songs 10 Cities. Even the crowd cheering is limited to between tracks and not overwhelming at all. As an aside, back in October, Søren Andersen released his own instrumental electric album Guilty Pleasures featuring songs such as “Bird Feeder” and “Skybar”. If you’re looking for solid guitar work along the lines of Joe Satriani, this is a good album for you.

10 Songs 10 Cities is a tremendous representation of what two very talented guitarists — and a talented rhythm section, I might add — can do on a stage. Gone are the studio “crutches” and what’s left is honest and genuine. This album is a must for fans of Electric Guitars, and something to explore if you’re into riffable hard rock and duelling guitars.