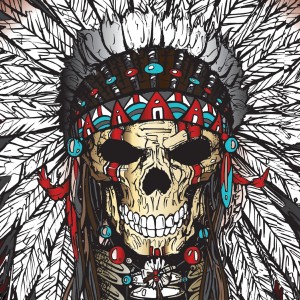 Review:
George Lynch, aka Mr. Scary, has been a very busy man since the start of 2014. He has released four albums during this timespan and even has one more (Lynch Mob‘s Rebel) to be released later this month. He has put out the KXM album (a project with Doug Pinnick from King’s X and drummer Ray Luzior from Korn), the Lynch Mob album Sun Red Sun consisting mainly of new tracks, the Sweet & Lynch album Only To Rise (with Michael Sweet of Stryper), and now a new solo double album entitled Shadow Train.

Shadow Train is a project that Lynch has been working on for some time now. It is a soundrack to a documentary he will be releasing later this year about the Native American Indians (which runs in his blood) living in today’s society. Without seeing the documentary, I find it difficult to give the album a review it deserves, so I can only base mine on the music.

The soundtrack has 18 cuts on it. The musicians consist of vocalist Greg Analla, drummer Jimmy D’Anda (BulletBoys), bassist Gabe Rosales and keyboardist Donnie Dickman. This is a hard rock album rather than an eighties rock album that most fans might expect from Mr. Scary. This is not to say that Lynch‘s guitar work is not up to par because he has some amazing riffs and guitar solos all over this album. Fans that enjoy excellent guitar playing will enjoy this album. Analla does a great job with the vocals on this album. With most hard rock out there right now, the vocalist has a raspy and deep voice but Analla has the high pitch clean vocals that makes his singing different than what is out there right now.

This album does have a little bit of everything Lynch has done. It’s got a rap/rock song “Ghost,” similar to what can be found on Lynch Mob‘s Smoke This album. It is also filled with a few spoken word tracks (“Trail Of Tears” and “Sioux Wake Up”), which explain the troubles that the Native Americans are facing in today’s society. Other standout tracks on this album are “I Am Weapon” with a killer groove to it, ” Now It’s Dark,” “Fallen,” “Blinded” with some great guitar playing towards the end, “Currency Of Lies” and the closing track “World On Fire.” After listening to the soundtrack, I am really interested in seeing the documentary so I can see where the inspiration came from on these songs.