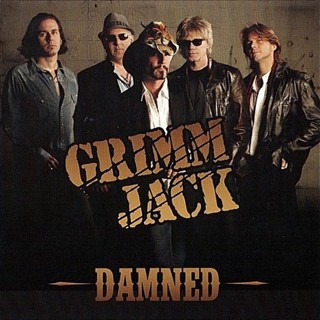 Review:
Confirming my suspicions that every long haired band from the ’80s will eventually return, in one form or another, is New York’s Grimm Jack. Originally forming in 1985, this five piece released some singles, EPs and the Jailhouse Tattoo album while searching for that ever elusive major label recording contract — unfortunately a tsunami named grunge washed away that possibility in the mid-’90s. However unearthed once again, like a scene from the movie Jurassic Park, Grimm Jack resurfaced in 2010 with the end result being their new three-song single called Damned.

The title track, with its Roxx Gang meets Faster Pussycat riffs and whiskey soaked vocals, begs the question — what took these guys so long to return? Even though the song deserves a heavier bottom end, the drums sound especially ‘tinny’ (something that could easily be fixed in the production room), it is a killer slice of ’80s inspired sleaze rock. Next up is “Ohio”, and while Grimm Jack stay true to the original, a number that reflects a piece of history we should never forget, covering someone as unique sounding as Neil Young is really a no-win situation. Wrapping up Damned is the appropriately named “Last Call”, a fun party song that would feel right at home as the closing number to a Grimm Jack live show.

If Damned is strictly an attempt to get Grimm Jack‘s feet wet once again it serves its purpose. With four-fifths of the classic line-up intact, hopefully Grimm Jack don’t let an indifferent music scene (towards hard rock in general) derail their progress for a second time — because I’m interested in hearing what these seasoned veterans can pull off on a full-length album.