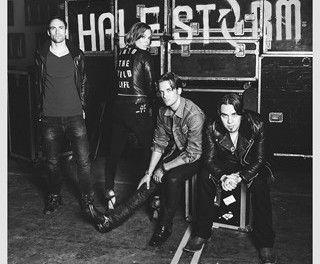 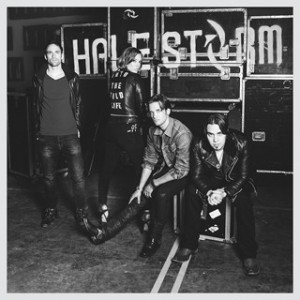 Review:
Modern sounding does not equate to better music. That is my assessment after having repeatedly listened to Halestorm‘s new record Into The Wild Life, which follows up their absolutely stellar and brilliant The Strange Case Of… (click here to read that review). Truth be told, I was going to heavily criticize Into The Wild Life after the first spin, but after repeated listens I have warmed up to it somewhat. Had Halestorm not previously released one of my favorite records of 2012 with The Strange Case Of…, and if frontwoman Lzzy Hale did not have such a great voice, I would have likely dismissed the group’s new effort after that first listen but instead I ended up playing it quite a bit despite initially pretty much hating it. The moral of this story is that if you listen to an album enough times, you will likely find some good stuff in there somewhere.

Into The Wild Life starts with everything that is wrong with a good band trying to incorporate too many modern sounds into a song. “Scream” is still listenable despite the displeasing guitar sounds that get on my nerves and which make me feel like I am hearing construction work at an industrial park — it simply could have been so much better. “Mayhem” is another example of poor sounding industrial-like guitars and distorted (or “voice box”) type vocals at times, which ruin the song. However it’s not all bad on Into The Wild Life — the slow verses on “I Am The Fire” highlight Lzzy Hale‘s singing, which is a great thing, and the sped up portions of the song also work well.Halestorm did a good job of slowing the song down, then speeding up, slowing it down, etc. for the entire track. “Sick Individual” feels somewhat experimental with how the verses are sung by Lzzy Hale but it works well, and one of the best tracks is “Amen” — the catchy chorus will likely make the song a live concert staple for years to come.

Aside from the awful “modern” or “industrial” sounding guitars on certain songs throughout Into The Wild Life, I find there is a big difference between Halestorm‘s last two studio records when it comes to the ballads, as the slower tracks on the new album fail to hit the mark. “Dear Daughter” starts off well, but the chorus and especially the “na na na” (or whatever is sung in the background) ruins the song. “Bad Girl’s World” also disappoints with a poor repetitive chorus (“That we live in a bad girl’s world, bad girl’s word, bad girls”) that really ruins the song and unfortunately never lifts the track to that next expected level. Perhaps Halestorm have decided to focus on ballads because there are two more, “the Reckoning” and “What Sober Couldn’t Say” (what a witty title), which are the best of the slower songs on Into The Wild Life but still fall far short of the goose bump variety.

The best song hands down on Into The Wild Life is “Gonna Get Mine”, which has some moments just like the good old days of The Strange Case Of… along with lots of attitude. Another good one is the album closer “I Like It Heavy”, which has an old-school feel to it at times.

To be honest, if it wasn’t for Lzzy Hale‘s amazing voice, Into The Wild Life would not be worth listening to and results in Halestorm delivering a disappointing follow-up toThe Strange Case Of… Hopefully, the songs from Into The Wild Life will translate better in a live setting because I have not given up on Halestorm just yet.