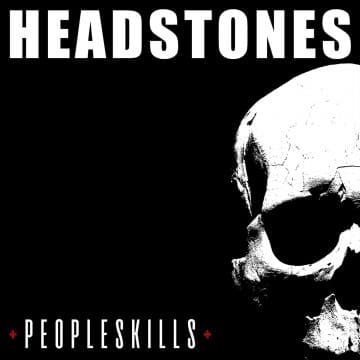 Review:
One year ago, in October 2018, the Headstones celebrated the 25th year anniversary of their first full album, Picture of Health. In that review, Sleaze Roxx stated, “Combining punk with biker rock and an overall sense of non-conformity, I fell in love with the sound and fury immediately.” Twenty six years and seven studio albums later, the Headstones continue to ramp up the attitude and aggression with People Skills.

The album’s title is purely ironic, of course. “Dimes And Pennies” is hardly a statement about social interactions. “Damned” is about being tricked by one’s own brain, “…when the hesitation kills you, I’m pretty sure it kills us all…” A punk way of saying that as adults we are all in the same boat.  “Horses” is another up-beat ode to recovering from mental health issues, “everyone is broken…” “…but when I set those horses free…”.

Come to think of it, this album isn’t teaching me positive people skills at all! What it does offer is the Headstones’ pounding trademark alt-punk sound. The power and aggression of the first few tracks are offset by a mellower, acoustic “Motorcade” before quickly veering back on track with several more heavy cuts. Lyrically, Peopleskills sounds depressing as fuck, and it sort of is. You can imagine the themes covered in “Caught In A Loop” or the bluesy “Dark Side of The Doomed.”

Thing is, musically Peopleskills is a solid offer of good, up tempo tracks despite the subject matter. “Best You Can Do” has a 2000s Jet or Queens of the Stone Age feel, and “Part of Me” is fun. There’s an ugly undercurrent to “By Sunday” with a ton of back end and Hugh Dillon providing a dark vocal delivery. The Weezer sounding “That’s What I Get for Listening” is an ultimate screw you to people who have survived the entire album of intensely personal lyrics. “That’s what you get for listening, that’s what I get for playing that part, that’s what I get for listening, to my head instead of my heart…”.

Peopleskills comes across as one big concept album, one with a message that Hugh and the boys have gone to some dark places in their time. And yet, the tracks themselves are catchy and memorable, high-tempo and ugly-aggressive. Peopleskills for me ranks above the last few Headstones releases as a really well done album from start to finish. Twenty six years later, the band may be more mature, but still as nasty as ever.

Headstones‘ “Leave It All Behind” video:

LEAVE IT ALL BEHIND Official Video

LEAVE IT ALL BEHIND by Headstones 2019.