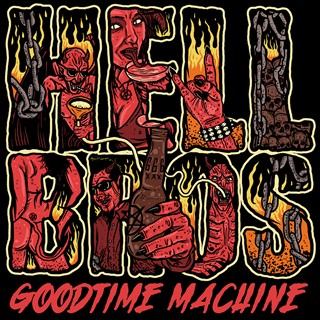 Review:
The Canadian based Hellbros fell on my radar when I noticed that they were scheduled to play at the Bovine Sex Club in Toronto last month. When I went to check the band out online I found their Goodtime Machine album was available for download free of charge! There are very few bands giving their music away for free, but Hellbros have apparently done so for presumably quite awhile — since the band is shooting for one million downloads of Goodtime Machine at www.rocktoamillion.com.

Hellbros definitely get your attention right from the start when opening track “Street Party” quickly kicks into full-speed fury. Built on a nasty and infectious guitar riff and drummer Josh Roy‘s rapid paced drumming, the song rocks hard from start to finish and never lets up. Lead vocalist Peter Jurt‘s gruff but commanding screams seem perfect for the song and the gang vocals during the chorus are fitting for the street party. The song feels like it is jumping out of my speakers every time that I listen to it.

Hellbros are not a one trick pony though and offer some slower paced, and at times melodic, tracks on Goodtime Machine such as “Trespassing By Night” and “For The Worst” — but always with this sense of urgency, heaviness and in-your-face brashness and attitude. There is nothing fancy on Goodtime Machine — just straight-up and loud rock ‘n’ roll all the time, with none of the songs clocking over four minutes (three of them don’t even reach two and a half) in length. Frontman Peter Jurt will never be known as one of the great singers of all time but you get the feeling that Hellbros do not care about stuff like that. I have to give a lot of credit to the production team of Goodtime Machine because the recording really feels like it captures Hellbros‘ energy and attitude.

Although the in-your-face brashness continues throughout the entire CD, I find that the songs on first half of Goodtime Machine are stronger than the latter half. Nevertheless, I like all the songs except “Rock & Roll Acid Zombies”, whose arrangement and melodies seem to be lacking. My favorite songs on Goodtime Machine are definitely the opener “Street Machine”, “For The Worst” and “Trespassing By Night” who, let’s face it, both sound a bit similar with respect to the guitar riff that they are built on, the faster paced “Kill You” and “Dead City Rockers”, which feels like the whole band is screaming “We’re all dead meat” or something like that right in your face.

If you like non-stop, loud, belligerent, uncomplicated rock ‘n’ roll with lots of attitude, Hellbros‘ Goodtime Machine will most likely fill that need. The good news is that the band is currently raising funds to deliver the follow-up to Goodtime Machine, which will apparently be called Calling All Giants. If you want to help the band out a little bit in their quest to offer some new music — perhaps as you enjoy your free download of Goodtime Machine — visit their website for details.