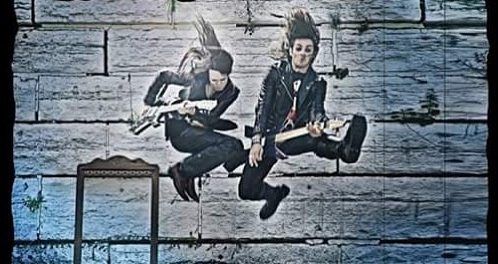 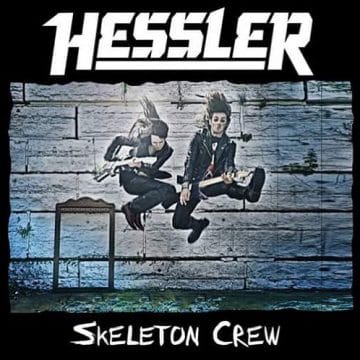 Review:
“One more time” — that has been the constant refrain in my subconscious mind since popping Hessler‘s new album Skeleton Crew in my CD player yesterday. As in “One more time — I want to hear this album again.” At first, it was more curiosity on how have Hessler fared and/or rebounded after having endured what would have likely spelled the end of most bands. But soon enough, I was simply pushing “play” time and time again because I wanted to hear Hessler‘s new heavier reincarnation and transformation. The six songs on Hessler‘s Skeleton Crew only clock in at just over 20 minutes so I figure that I have heard the EP over 20 times in one day.

If you don’t know the story, Hessler were on the verge of some big things with some reported interest from record labels including one major one after releasing their first two albums Bad Blood (2011) and Comes With The Territory (2012) with blonde bombshell Lariyah Daniels on lead vocals. That came crashing to a halt when Daniels decided to leave the band and relocate from Chicago, Illinois to Atlanta, Georgia in early 2014. Daniels went on to get married, start a family and go in a much darker direction as the singer of melodic occult metal band Khaotika. To capitalize on their many opportunities directly ahead of them, Hessler quickly recruited powerhouse female singer Jessikill who was supposed to relocate from San Antonio, Texas to Chicago, Illinois. That never happened and despite releasing a phenomenal EP entitled Ghost Dance in mid-2014 (that finished #3 on Sleaze Roxx’s Top Ten Albums of 2014), Jessikill eventually left the band in November 2014 to pursue love and stop commuting from Texas to Illinois. While that was not that surprising given that Jessikill had never made the permanent move to Chicago, what was surprising was the departure of long-time guitarist Frankie “Snakes” Sripada and drummer Derek Spiteri who presumably got discouraged with the turn of events. This only left two men standing in founder and guitarist Igz Kincaid along with bassist Erik Michael (the latter having played on the last two EPs). With only two band members left at the end of 2014, it became virtually impossible for Hessler to capitalize on the release of the very good documentary entitled The Last Kamikazis of Heavy Metal done by El Jinete Films about the band.

Determined not to experience the same issues once again, Kincaid decided to finally take the plunge on what he had contemplated doing since the get go, which is to take over the lead vocal duties. In doing so, Hessler were undergoing a major make-over going from a female voice to a male one, and from the female powerhouse Ronnie James Dio of the world (in Jessikill) to a largely untrained voice closer to a Blackie Lawless in terms of vocal capabilities and range. Can you even imagine having a band and going from Ronnie James Dio to Blackie Lawless in terms of singers? No offence to Mr. Lawless (as W.A.S.P. are one of my favorite bands) but he can’t hold a candle to Mr. Dio when it comes to singing. I will admit that my main concern going forward with Hessler was how the band would sound with Kincaid as the singer.  After all, Kincaid had some big shoes to fill singing wise having to follow Jessikill.

I will say that having Kincaid as the new singer feels more natural than the two previous female singers because to me, Kincaid has always been the face and leader of the band and it has always felt weird having him kind of take second fiddle to whichever singer Hessler had at the time. It’s kind of like Black Sabbath in the years without Ozzy Osbourne or Ronnie James Dio. Tony Iommi was clearly the face of the band yet you might have had Tony Martin addressing the crowd at concerts. It just did not feel quite right. With Kincaid taking over the singing while continuing his guitar duties, Hessler now have the quintessential frontman in terms of presence and recognizability. So the big question for me with respect to the aptly named Skeleton Crew (given that Hessler only now has two official members in Kincaid and Michael) was whether Kincaid could pull off the lead vocal duties and how would the band sound in the process? I should also mention that Michael has taken, in my eyes, a bigger role in Hessler. Not only has he switched from bass to guitar (and proven himself to be a very good guitarist) but when I think of Hessler, I now think of both Kincaid and Michael, which I think is important for the band going forward.

The one good thing about Hessler is that the songwriting music wise has always been top notch in what they are trying to convey. The old school heavy metal and melodies that you can hear on their past albums have always been very good. Given that I understand that Kincaid was the primary songwriter in the band, that aspect is still there and frankly you can hear it right away when listening to Skeleton Crew. Obviously, the perhaps new tandem writing unit of Kincaid and Michael has worked out very well because the music itself on Skeleton Crew has all the trademarks of what I would expect from Hessler — an old school heavy metal sound filled with killer guitar melodies and riffs. Skeleton Crew kicks off with the first single “Killing Machine” which starts with an old school thrash metal guitar riff right out of the ’80s. Undeniably, Hessler have decided to go in a heavier direction and in the process the music fits very nicely with Kincaid‘s vocal delivery, which is part screaming / part almost talking at times. “Killing Machine” never lets up starting fast off the gates and keeping the pedal to the metal. It’s just an enjoyable heavy metal track that will remind you of the glory days from the ’80s thrash scene.

“Black Rose” is the closest link between older Hessler material with the strong melodies at the beginning reminding me of the material on the Comes With The Territory album. I love the extended guitar solo during the track and later on the rather short guitar harmonies that remind me of Iron Maiden circa Somewhere In Time era. “From The Dead” has the enjoyable traditional Hessler gang vocals right from the start and reminds me of old school W.A.S.P. with the song’s delivery. If there’s one thing that Hessler are quite adept at is coming up with a memorable chorus section in each of their songs and “From The Dead” definitely benefits from that.  The “bass solo” followed by the guitar melodies / solos towards the end of the song work quite well. “King Of Sting” or an early  version of it was released back in March 2015 and is another enjoyable pedal to the metal, take no prisoners, heavy metal rocker. It’s simply an easy song to get into. “Intruder” is my least favorite song of the first five and although it is still good, it does not quite measure up to the other four tracks that I previously mentioned.

Skeleton Crew does end on an odd note though. At first, when I heard Kincaid starting to speak, I thought that Hessler were offering their version of Mötley Crüe‘s “In The Beginning” from the incredible Shout At The Devil album. However, as the  “Skeleton Crew” song — if you can call it that — progressed, I soon began to think that given that the Skeleton Crew album was only clocking at just over 20 minutes, this might be it for the song and I was right. “Skeleton Crew” turns out to be a monologue from Kincaid — reminiscent in some ways of what can be found at times on W.A.S.P.‘s Crimson Idol — about presumably the hardships that Kincaid and Michael endured with all the turmoil and disappointment of being the two men left standing by the end of 2014. “Skeleton Crew” is not the way I wanted to end Hessler‘s new EP but I can appreciate that Kincaid and Michael have gone through some hard times in the last two years to get the Hessler juggernaut back on track so I’m willing to overlook this last “track.”

I readily admit that I was skeptical that Hessler could bounce back after losing three fifths of the band and especially their female powerhouse singer Jessikill, and even more skeptical once Kincaid announced that he would take over the lead vocals, but I should have known better. Kincaid and Michael have proven that there is more than a lot of fight in them and more importantly some great new music in them. I am now fully convinced that Hessler‘s best days are ahead of them and I simply can’t wait to see these guys play live once again and hopefully release more new music sooner rather than later. Long live Hessler!

iTunes – https://itunes.apple.com/us/album/killing-machine/id1169163058?i=1169163153 Physical Copy @ hessler.bigcartel.com LYRICS: Do I go left, do I go right Go straight ahead, turn off the light My god, which way leads out One wrong move, madness unreal Spiraling down, asking for more There’s no escape, nowhere to go Angel above, don’t cry for