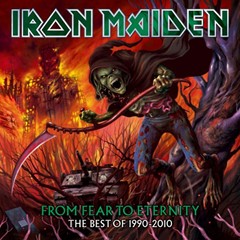 Review:
What do you do when you release a critically acclaimed studio album, The Final Frontier, and tour sparingly behind it? Well, if you’re Iron Maiden (and if you released a live record recently) you put out another greatest hits album of course!

Needless to say, this cycle of countless live albums and compilations is getting ridiculous. But with a track listing that includes recent choice cuts like “Brave New World”, “The Wicker Man”, “El Dorado”, “Fear Of The Dark”, “Be Quick Or Be Dead” and “Afraid To Shoot Strangers” it’s not a complete wash now is it?

From Fear To Eternity: The Best Of 1990-2010 is a double CD set that concentrates on the last twenty years of the band. This covers the albums No Prayer For The Dying, Fear Of The Dark, Brave New World, Dance Of Death, A Matter Of Life And Death and The Final Frontier. The Blaze Bayley era material from The X Factor and Virtual XI are represented here in, you guessed it, live form from the Rock In Rio album. From Fear To Eternity takes on the theme of Iron Maiden‘s current live set list whereby the band has been playing newer material mainly from their last four studio albums — it’s not exactly what the casual fan might want to hear, but it’s a treat for the Maiden enthusiast who doesn’t mind the band mixing things up.

From Fear To Eternity isn’t going to fly off shelves with five previous Iron Maiden best-of collections in existence, but this album could be used as sampler of current Iron Maiden work for casual fans who haven’t picked up their work post 1992’s Fear Of The Dark. If you are looking for a well rounded Iron Maiden compilation you might want to skip this and opt for 2002’s Edward The Great or 2008’s Somewhere Back In Time instead.

Reviewed by Ruben Mosqueda for Sleaze Roxx, May 2011