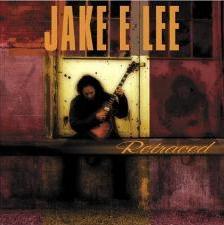 Review:
For someone that claims he hasn’t picked up a guitar in over a year, Jake E. Lee sure hasn’t lost any skills. In fact I’ve always touted Jake as Ozzy Osbourne‘s best guitarist (or at least the most unheralded) – sure Randy Rhoads and Zakk Wylde may be more influential and have larger fan bases, but Jake has always had a more roots oriented sound. With guitarists it isn’t always how fast you can play or how flashy one is, in my opinion it all comes down to feel and knowing when and why certain notes need to be played. Jake E. Lee is one of the shredders that understand this simple concept.

This is a covers album and in the liner notes Jake himself states that he finds such albums to be a “waste of time” unless one is able to add something to the songs or introduce some music to a new audience – and that is what is being done on Retraced. The blues rock standards found on this release aren’t songs that would usually appear on some bargain bin best of collection. With that in mind, and the chance to work with the legendary Tim Bogert and Aynsley Dunbar, Jake E. Lee decided that a covers album would be worthwhile after all – and I agree.

Right from the opening riffs of the incredible “Whiskey Train” you know that Jake is in fine form and still has the chops – that song also features enough cowbell to make everyone happy. But the magic doesn’t end on that first track; just listen to Jake‘s precision picking on “Way Back To The Bone” or him unleashing a killer solo at near the end of “Love Is Worth The Blues”. In fact you can close your eyes and pick any song on this disc and hear some incredible guitar licks, this is the type of solo album I was wishing Mark Kendall would have released. Badlands used to do some covers on their albums and live shows, and each of these songs would have fit in nicely with their catalog.

If you could compare this to one contemporary artist I would say Retraced is in the same vein as Kenny Wayne Shepard due in part to the bluesy wail of vocalist Chris Logan. This really is an incredible album and lets hope it doesn’t take another year for Jake to pick up the guitar again. www.jakeelee.com.