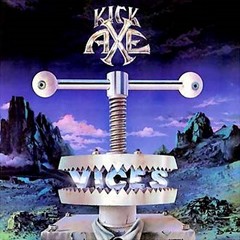 Review:
Vices was the first album from Canadian metal act Kick Axe — and a little gem it is too, far superior to anything else they did. Another little fact about these guys is that they did two songs for the original Transformers movie under the name Spectre General, which I rate as the best numbers they did — go figure.

Vices is what you would expect from any band of this time (the mid ’80s) — big choruses, riffs galore and some nice shredding during the obligatory guitar solos. It’s not ground breaking, but it is fairly high quality stuff in the production department.

I can’t say I’m daft about “Heavy Metal Shuffle”, but I love the guitar solo which is exactly the type of ‘swinging a cat’ sound I love. “Vices” is a generic beat-your-chest anthem — nothing great, but a solid enough track. “Stay On Top” is another solid number driven by the chorus before the ballad “Dreamin’ About You” enters — a lovely change of pace and a fantastic example of the ’80s rock ballad. “Maneater” is up next and is a number that just plows straight ahead with its pounding drums — a great slice of balls to the walls rock. “On The Road To Rock”, the lead-off single and video, is another solid track — again following the theme of riff-driven, big chorus numbers. “Cause For Alarm” picks up the pace again and is another good solid song yet nothing spectacular. “Alive & Kickin” next, and while a lot of people like it I consider it to be filler material. “All The Right Moves” is another solid but unspectacular and inoffensive number, and last but not least is “Just Passin’ Through” which rounds off this little musically journey. It’s a great head nodder that flows along very nicely.

I use the word solid a lot in this review, and it’s very appropriate. Vices is a solid album with a ton of good, if at times unspectacular, numbers. It’s definitely worth a listen and if you’re fan of big choruses, riffs, and solos then it’s worth shelling some of your cash out on.