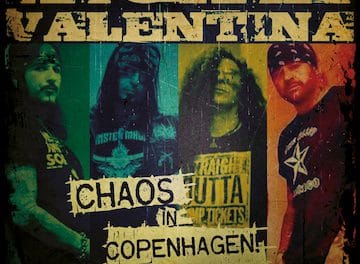 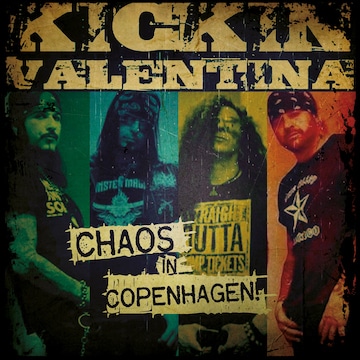 Review:
This review is going to be short and sweet, just like the new EP from Kickin Valentina. Chaos In Copenhagen is the band’s first output since Imaginary Creatures back in 2017. Since then, Kickin Valentina have a new singer in DK Revelle, but have kept the same modernized ’80s sleaze sound that everyone knows and loves.

Apparently, the story of this quickie EP is that, shortly after the band renewed their record deal with Mighty Music, the company asked if they wanted to head into the studio during a day off touring. Kickin Valentina had already been writing for a new album, and jumped at the chance to get something on tape. After a 14 hour day in Denmark, the result is Chaos In Copenhagen… an appetizer for a full-length main course in 2020.

Opening track “Sweat” is a banger from start to finish. The pounding back end constantly drives the guitar and vocals. The opening to “Easy Rider” reminds me of something, though I can’t figure out what. I’ll probably put my finger on it as soon as this review is published! There is a grittiness to the vocals, and the musical style reminds me of Lynch Mob, kind of biker rock but with more thought put into composition. “Shakedown” is the final studio track on Chaos in Copenhagen and it rocks hard in a Little Ceasar vein. The song they chose to close out the EP is “Get Ready”, recorded live earlier this year at the Bang Your Head festival in Germany. These guys sound amazing live and leave nothing in the dressing rooms! The full set is available on YouTube as well.