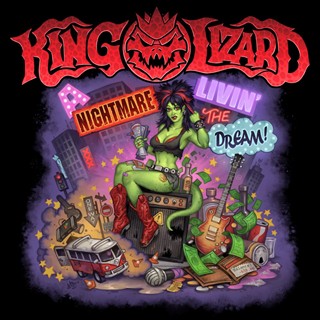 Review:
Two years ago King Lizard gave the sleaze metal scene a swift kick in the ass with their debut offering Viva La Decadence. After enduring a rhythm section shake-up the London bad boys are back with another blistering collection of sleaze anthems called A Nightmare Livin’ The Dream.

Right from the beginning of “Come Get Some”, with its chugging freight train riffing, the band snarl like a wolverine backed into a corner — screaming and barking through what should become their signature show opener. “Hair Of The Dog”, not to be confused with the Nazareth song of the same name, is another full-steam ahead rocker that is propelled by an unrelenting guitar attack that explodes into madness in the closing seconds. “If It’s A Sin” takes on a darker vibe and works really well while the title track revs things up once again for what could be the album’s best bet for a ‘hit’ single. “Just To Hear You Say It” is the album’s mandatory ballad but from there it is full-on rock. “This Ain’t Love” finds Flash Roxx Sawyer doing his best Axl Rose impression, “Hard To Get” is filled with banshee wails, and “Waterloo Ratz” ends the festivities on yet another high note.

While Axl Rose is busy revamping the Guns N’ Roses brand, and showing up late for everything except the buffet line (judging by his recent appearance), King Lizard have stepped in to fill the void with a hunger that obviously disappears after multi-million album sales. And what is it with guitarist Niro Knox, who places his stamp on every song here? His solos are played with a furiousity that makes me wonder if he caught his guitar tech screwing his girlfriend mere hours before entering the recording studio.

Here’s what sucks about the music scene… if Axl Rose released these songs as Chinese Democracy fans would be gushing that it was his best work since Appetite For Destruction. Instead they were recorded by King Lizard, who will probably get ignored because they aren’t a ‘big’ name. In that respect it is ‘a nightmare living the dream’ for young artists — but there is nothing nightmarish about listening to King Lizard‘s latest slab of sleaze.