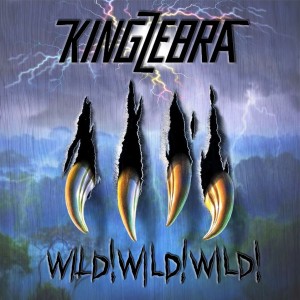 Review:
If you were to close your eyes and play King Zebra‘s new record Wild!Wild!Wild!, you would most likely think that this album was made sometime back in the mid to late ’80s and perhaps it had just been recently re-released since the production is better than back in those days. The melodies, sounds and hooks on the record are all reminiscent of that golden era in glam hard rock / hair metal. As it turns out, King Zebra are a fairly new band emanating from Switzerland of all places — which is not exactly the hotbed of rock and roll except perhaps in the eyes of Krokus — and Wild!Wild!Wild! is the group’s second full length studio release.

To say that I like Wild!Wild!Wild! is an understatement. It is more like I love Wild!Wild!Wild!. I admit that the gritty singing of King Zebra‘s lead vocalist Chip Leather (interesting name) took a little bit of getting used to at first but I find now that his rougher delivery works really well with the polished guitar driven eighties music that his bandmates produce time after time, track after track. I truly believe that if King Zebra‘s Wild!Wild!Wild! had been released back in the 80s, the band would be at the very least one of those bands like Dangerous Toys that disbanded with the advent of grunge after cultivating a loyal following and which reformed twenty years later to play one off gigs here and there and at small festivals.

If you haven’t figured out from the band members’ names or silly group name, King Zebra are not a band that takes themselves that seriously. After all, the short lived band has a prior album named Greatest Hits. They remind me a bit of Steel Panther with their light hearted humour. As far as Wild!Wild! Wild! is concerned, every track on it is a good one. If you are looking for something truly original, there is no doubt that the album will leave you disappointed. However, if you are longing for eighties sounding, catchy, sing along type songs with tasty not overdone guitar licks, Wild!Wild!Wild! may well be the equivalent of a wet dream for you. Given that King Zebra‘s music borrows heavily from a past era, you can find a lot of similarities. For example, the guitar riffs on “Point Of No Return” remind me a lot of Eddie Van Halen‘s guitar playing on the 1986 released 5150. On the other hand, “Too Many Rules” reminds me of Extreme with its funky groove. You know a band has hit a home run when I even like their sappy cheesy ballad or at least “slower” song but the acoustic tinged “Purple Roses” is for the most part quite good except for the repetitive “purple roses” background vocals during a few parts of the song.

It’s tough to pinpoint exactly which are my favorite tracks on King Zebra‘s Wild!Wild!Wild! since I enjoy each one of them but if you have a gun to my head, I’ll go with “Too Many Rules” with its funky grooves, “Never Stop Trying” with its nice melodies and “Welcome To Longstreet” with its anthem like feel and soaring guitar solo. If you like glam and hair hard rock / metal, check out King Zebra. I am sure that you won’t be disappointed. If you want to test out the waters, you can get a free download of one prior King Zebra song (“20 Rules!”) on the band’s Facebook site.