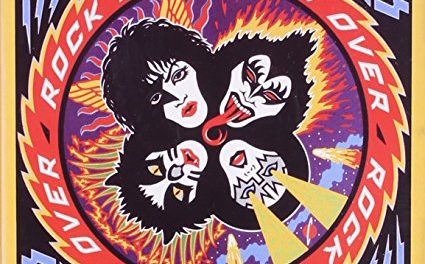 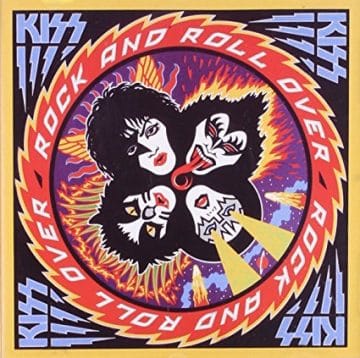 KISS
ROCK AND ROLL OVER
Released on November 11, 1976 (Casablanca)

Review:
It’s incredible to think that today is the 40th year anniversary of the release of KISS‘ fifth studio album Rock And Roll Over. As a kid, I knew of KISS prior to hearing them simply by seeing some of their cool vinyl album covers (Destroyer and Love Gun come to mind) at the local library. Even before I can remember hearing a KISS song, I recall seeing them on the local news when they finally took off their war paint and revealed their faces for the first time via the video for “Lick It Up.” It wasn’t until Animalize came out that I became a KISS fan and the shock rockers quickly became my favorite band for the longest time. It was so much fun discovering their back catalogue of music except that I had to search every used record store in town to obtain their prior albums, which were seemingly mostly out of print.

It wasn’t like it is now when you can simply go on the internet to find the rarest of the rare albums with a few clicks of a mouse. Back then, to complete my KISS discography without resorting to expensive purchases via stores that advertised in magazines, I had to check every used record store in Canada’s nation capital hoping that whichever KISS album that I was looking for turned up for sale. I did end up finding and purchasing all of KISS‘ albums including The Originals, which was essentially the repackaging of the first three KISS albums. The album that really put KISS over for me was Alive II, which had five songs each from the Destroyer, Rock And Roll Over and Love Gun albums without counting the bonus studio tracks. Eventually, I purchased Rock And Roll Over, which I still consider to this day one of KISS‘ best studio albums.

The last time that I had heard Rock And Roll Over dated back to when it was playing prior to Sebastian Bach hitting the stage at The Phoenix in Toronto, Ontario, Canada almost two years ago. Hearing the remastered version again for the purposes of this review reminded me just how much I love this album. The first thing that struck me today was how catchy the songs on Rock And Roll Over really are. I couldn’t help but sing along to all the songs and let’s face it, the lyrics are really simple and easy to remember. Lyrics such as “Put your hands in my pocket / Grab onto my rocket” for the track “Take Me” don’t need any interpretation, are downright almost juvenile and yet brilliant at the same time.

The second thing that struck me upon revisiting Rock And Roll Over today is that all the songs are consistently good to great and really flow very nicely. There’s no question that the five tracks that made it onto Alive II are good (“I Want You,” “Hard Luck Woman” and “Calling Dr. Love”) to great (“Ladies Room” and “Makin’ Love”) but the five that didn’t make the cut for the live album at the time are very strong as well. “Baby Driver” shows that drummer Peter Criss‘ groovy vocals added an old school “big band” (at the time) dimension to the KISS tunes. “Mr. Speed” and “Take Me” could have easily become KISS classics but for whatever reason did not pan out that way. Hell, I even like the Gene Simmons sung “See You In Your Dreams” which is undeniably the weakest track on Rock And Roll Over.

The last thing that struck me today was how identifiable Ace Frehley‘s lead guitar playing really is. There are really only a few guitarists that you can hear and instantly think that has to be such and such a person. One guy that instantly comes to mind in terms of a recognizable guitar tone is Eddie Van Halen. Frehley has always had a special identifiable sound to his guitar playing and his solos on Rock And Roll Over reminded me what an underrated guitarist he really is.

The one knock on Rock And Roll Over 40 years later is that it does sound a bit dated, even when I listen to the remastered version of the album. That being said, what album does not sound a tad dated after 40 years? At the end of the day, Rock And Roll Over still stands up quite well 40 years later and remains one of KISS‘ best and most consistent — if not their most consistent — studio album based on a track by track basis.