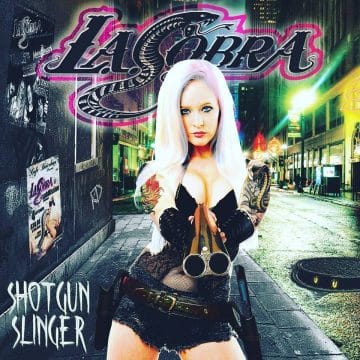 Review:
About two weeks ago is when I became an official L.A. Cobra fan. Don’t get me wrong. I have always supported the South African sleaze rockers since taking over the reigns of the Sleaze Roxx website two and a half years ago. After all, Sleaze Roxx proudly premiered the last two L.A. Cobra videos — for “Shotgun Slinger” and “Rock ‘N Roll Pretoria” — and will be premiering the next one for “War” in two days on Christmas day given that the South African rockers are one of the newer bands carrying the sleaze rock torch. However, it wasn’t until hearing L.A. Cobra‘s new studio album Shotgun Slinger that I became a real fan of their music.

I am not sure if it’s because Crashdïet guitarist and Sweet Creature frontman Martin Sweet is involved with this album — he ended up handling the mixing, mastering and production duties (the latter with the band) along with contributing additional backing vocals — but L.A. Cobra‘s Shotgun Slinger has followed the same path as Sweet Creature‘s debut album The Devil Knows My Name last year in that I wasn’t overly impressed with any of the singles released by either band but listening to each group’s entire album as a whole, I was eventually blown away. How blown away was I with respect to Sweet Creature? Well, Sweet Creature‘s The Devil Knows My Name ended up as the number one album on the Sleaze Roxx’s Top Ten Albums of 2016. I am not saying that L.A. Cobra‘s Shotgun Slinger will be the number one Sleaze Roxx album for this year but the record has a lot of similarities to Sweet Creature‘s debut album (without sounding like a duplicate in any way) and I am loving it a little more each time that I listen to it.

Sometimes the key to success is maximizing what you got. In the case of L.A. Cobra‘s frontman Don Cobra, no one is going to mistake him for the next Rob Halford or Bruce Dickinson in terms of his vocal abilities including his range but his singing on Shotgun Slinger fits in marvellously well. And whenever his vocals might need a bit of lift, the additional backing vocals on the various songs such as for example on the title track are there to assist him. In some ways, Cobra‘s singing reminds me of Vain frontman Davy Vain‘s vocals, which is a really good thing. Again, I don’t know if it’s the Martin Sweet influence but L.A. Cobra have made some great strides on their third studio album compared to their second album How Much Snake Can You Take?, which guitar hero solos bordered a little bit on overkill. On Shotgun Slinger, the emphasis seems to be placed on great melodies throughout rather than killer but slightly out of context guitar solos during the songs.

Funny enough, the weakest track — and I say that lightly because really all the songs on Shotgun Slinger are really good — happens, in my opinion, to be ‘Rock ‘N Roll Pretoria” which the band released a video for back in July 2016. Although I really like the verses during that song and the “Oooh Oooh Oooh parts”, the distinct guitar melody at the beginning and which comes back throughout the song grates on my nerves. Luckily, the rest of the songs on Shotgun Slinger take the best from “Rock ‘N Roll Pretoria” and never look back. My favourites on the album are the title track with the killer verses where you feel like Don Cobra is almost talking to you, “Somebody To Love” which has a real ’80s almost pop feel without sounding commercial (the ’80s bands that I am thinking of escapes me), the easy to sing along to “War”, “Good Taste In Bad Woman” with the cool guitar sound and where Don Cobra‘s vocals really shine (you’ll likely be singing the words “I won’t slow down” at some point in the song), and finally “Midnight” with its easy to sing along chorus. Truth is I could have picked any of the first ten songs as my favourite songs on the album.

L.A. Cobra‘s Shotgun Slinger is the surprise album of the year for me. I never imagined that I would have liked it so much and really didn’t imagine loving it as much as I do. It’s an album that keeps getting better each time that I listen to it and that is the telltale sign of a classic album. This is one album that you’ll want to check out if you like sleaze type rock with great melodies.