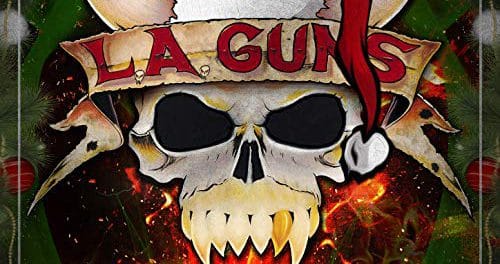 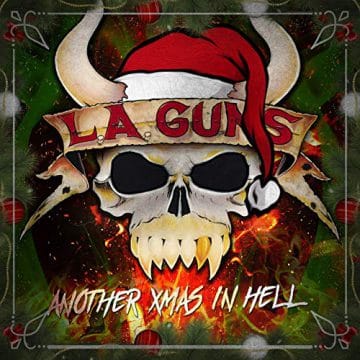 One of the perhaps only legitimate complaints that Lewis had towards Riley (stuff like Riley — who has played on some of the greatest “hair metal’ albums in the world — not being able to play anymore didn’t make much, if any, sense) was that the latter didn’t seem interested in putting out new material. Lewis and Guns have been rather prolific in the three years or so since they officially joined forces again as they have put out two solid studio albums, The Missing Peace (2017) and The Devil You Know (2019), and a really good live album Made In Milan (2018). It’s perhaps not surprising then that the duo along with the very good supporting cast of bassist Johnny Martin, guitarist Ace Von Johnson and drummer Scot Coogan have now released a Christmas themed EP titled Another Xmas In Hell.

What is surprising is that the EP was released out of the blue yesterday with no promotion whatsoever beforehand and only in digital format (for now). What is also surprising is that there are only three actual songs on the EP although five track names are listed. Given the seemingly hastily made album, it’s not surprising that four of the five songs are covers (from Billy Squier, Slade, The Damned and The Ramones). Frankly, I do not consider the song “Dreidel” — which clocks in at only nine seconds — as an actual song. Rather, it is a waste of nine seconds on the EP. I expect more from Lewis and Guns.

It’s hard to consider the opening track “The Bills / Christmas Is The Time To Say I Love You” as an actual song either. The first part (presumably “The Bills”) has well known actor William Shatner seemingly leaving a telephone message to Lewis and Guns about meeting up for drinks, working on the Christmas EP and with his recommendations for the band’s setlist. Of note, Shatner recommends in part that Lewis and Guns include “Over The Edge” into the setlist even though that track has been a staple of the group’s live set since they officially joined forces again about three years ago. Has Shatner actually been to a concert from L.A. Guns (the Lewis and Guns version) in the last three years? Interestingly enough, Shatner‘s monologue is longer than the actual shortened cover of Billy Squier‘s “Christmas Is The Time To Say I Love You.” Clearly, “Dreidel” and the Shatner featured opener should have never made it onto L.A. Guns‘ EP Another Xmas In Hell.

If you can look past the two aforementioned tracks that kind of kill the flow of the EP, the three remaining Christmas covers actually kick ass. I wish that Lewis and Guns would have put in a little more time in this release and come up with a couple more songs to make this a memorable Christmas EP rather than one with just three covers and two filler throwaway tracks. L.A. Guns‘ cover of Slade‘s “Merry Xmas Everybody” has a Beatles feel to it and a real feel good Christmas feel to it as well. Lewis sounds great on the track and gets an A+ for a memorable vocal performance on that one. The cover of The Damned‘s “There Is No Sanity Clause” has a cool punk edge to it and I really like the backing vocals for the chorus section fo the song. The closing track is also a good one. How can you go wrong covering a Ramones track? Once again, L.A. Guns‘ version of the song has a punk feel to it but also a real old school feel to it.

Overall, Lewis and Guns‘ Christmas EP Another Xmas In Hell has three cool covers on it and could have been so much better if a few more actual songs were added, and if the Shatner narrated opening track and the nine-second “Dreidel” had been left off the EP. It would have been nice if Another Xmas In Hell had been released in physical format as well. I give two thumbs up for the cool EP cover that made me really want to listen to the album in the first place. In any case, this release could have been so much better but it is what it is. At least, we got a little extra L.A. Guns material when none was expected so that’s a nice Christmas present in itself from Lewis and Guns.

Review by Todd Myers:
A few months ago during an interview, Tracii Guns mentioned that L.A. Guns had a Christmas EP coming out. Excited at the possibilities, I eagerly awaited news of a forthcoming release. As time went by, nothing was seemingly said or available regarding this release. Last week, out of nowhere, L.A. Guns announced that the EP had dropped and was available on all streaming and digital platforms. I immediately headed over to iTunes and paid the $5.99 to download the five track EP, Another Xmas In Hell.

The Phil Lewis / Tracii Guns version of L.A. Guns burst on to the scene with the fantastic release, The Missing Peace followed by the live CD/DVD Made In Milan. Sadly, the departure of guitarist Michael Grant came and it felt as though the spark that L.A. Guns had started to fade. Their follow up studio album from earlier this year, The Devil You Know, failed to live up to its predecessor. Drummer Shane Fitzgibbon departed the band following the completion of the album’s recording and I couldn’t help but wonder if the infusion of youth he and Grant brought to the band had exited once and for all. Now, in the same calendar year, we are gifted with a companion release, this time a holiday EP.

The opening track is more introduction than anything. Some decent little holiday sounding music kicks things off before it fades out to the antiquated sounds of an answering machine being played back and we hear the voice of none other than… William Shatner. He drops all the cliché comments one might expect — the band members’ names, hit songs in the setlist, the Rainbow Bar & Grill. I sure hope someone in the band was owed a favor from the guy, because it’d seem like a total waste of money to pay the guy for this. His voicemail rambles on too long before finally ending and the music fades back in and we get a brief sing along to “Christmas Is the Time To Say I Love You.” Sadly, there really isn’t anything to this track and given we only have five on the release, it is a complete waste of a valuable track.

A cover of the Slade classic “Merry Xmas Everybody” truly kicks the music off following the cheesy intro track and folks, we are off and running! This may very well be the best version of this song I have ever heard. L.A. Guns sound tight and aggressive as they rip their way through the glam band’s Christmas hit. Tracii lays down a great solo and this is a fun tune! Night and day from the opener. As soon as the song is over, a fast and raucous version of the Hanukah songs “Dreidel” blasts off and is over in a whopping 9 seconds!! It’s very punk rock and very killer, but, nine seconds? Given the dud of an opening track, could we stretch this out a bit longer? Due to time alone, this is another wasted track.

“There Ain’t No Sanity Claus,” a track by the UK punk band The Damned kicks things up a notch from the Slade cover. This is another very well-done song and the band pull it off in fantastic fashion! Phil’s British accent is perfect for these covers and the band members sound tight, mean, aggressive, and above all, like they’re having a blast playing these songs. The lyrics are modified to include the band members by name, and again, just a fun song to sing along and rock out to.

Rounding out the 15-minute EP, is a cover of The Ramones‘ song “Merry Christmas (I Don’t Wanna Fight Tonight.)” Once this tune kicks in, the band is three for three on songs for this EP. Just like the Slade and The Damned covers, this Ramones one is top notch and the band absolutely destroys it. It left me wanting more and quite honestly, feeling like we got three great songs and two duds. Heck, I can live with “Dreidel” because its fun in its own unique little way and fits the aggressive punk-like nature of the release, but the opening William Shatner track just stinks. If there was even one more track on this release, I think it could make up for the opener and really put this over the top. My only other gripe is that there is no physical release. As good as this EP is, and as fun as it come across, I know there are people out there who would be up for a vinyl 10” or a CD of this. Make it happen Frontiers! Better yet, record a bonus track for the physical release and get this thing out on the market!

As a long-time L.A Guns fan, the band honestly exceeded my expectations with (the actual songs on) this release. I feel it is a bit of a missed opportunity to really make it something special. Another song or two in the same vain as the others would have really pushed this over the top. That said, I feel like it is a bit of a bounce back from their last album and flaws aside, I highly recommend this release. Tracks two through five are a fantastically fun holiday listen! Take the couple of minutes to listen to this EP and enjoy it!

Track List:
01. The Bills / Christmas Is The Time To Say I Love You
02. Merry Xmas Everybody
03. Dreidel
04. There Ain’t No Sanity Clause
05. Merry Christmas (I Don’t Want To Fight Tonight

Reviewed by Todd Myers and Olivier for Sleaze Roxx, December 2019

Subscribe To Our Channel: http://radi.al/SubscribeFrontiers | Shop our U.S. & EU webstores: http://radi.al/FrontiersMusic | From the digital EP ANOTHER XMAS IN HELL. Stream/Download: https://orcd.co/lagxmasep Just in time for the holiday season and most importantly, Christmas carolling season, L.A. Guns have released a brand new digital EP, “Another Xmas In Hell”.