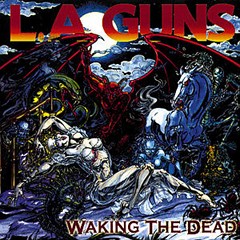 Review:
Waking The Dead was the follow-up to 2001’s Man In The Moon by legendary sleaze rockers L.A. Guns. Not only did this CD contain Tracii Guns‘ last appearance alongside Phil Lewis — who were still able to co-exist with each other — it also delivered a number of surprisingly good tracks. The other notable thing about Waking The Dead was the song “OK, Let’s Roll”, a tune dedicated to Todd Beamer and the rest of the brave men and women who died rushing the cockpit of Flight 93 during the events of 9/11.

“Don’t Look At Me That Way” opens Waking The Dead off in solid, if unspectacular, fashion and sets the tone for the entire album. “OK, Let’s Roll” comes next and for me is simply a brilliant track that just drives along. Some people may be upset by such songs, but I feel this one is a fitting tribute from the band and it kicks ass like it was meant to, so enjoy it for what is. The title track is just barely passable and even some good axe work by Tracii isn’t lifting this one out of mediocre. This is followed by “Revolution” which is another of the outstanding numbers on Waking The Dead — everything just fits in this song and it’s a great slice of rock goodness. “The Ballad” is next and does exactly what it says, it’s a way of calming the pace down before the rush to finish. “Frequency” is an interesting song with quite a few pace changes that keep it flowing along. “Psycopathic Eyes” picks the speed up considerably and screams punk — it is top stuff — followed by “Hellraisers Ball” which is solid enough even if it is a bit uninspired. The last two songs, “City Of Angles” and “Don’t You Cry” are absolute gems. Both of these, to me, define what the whole L.A. Guns sound is about as well as the whole sleaze scene when it was in full swing.

Take the last two numbers, along with “OK, Let’s Roll” and “Revolution”, and you have an album that quite frankly is the best thing L.A. Guns had done since their 1989 classic Cocked & Loaded.