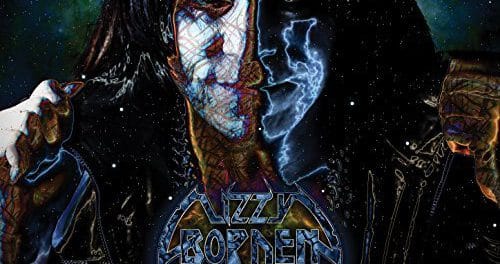 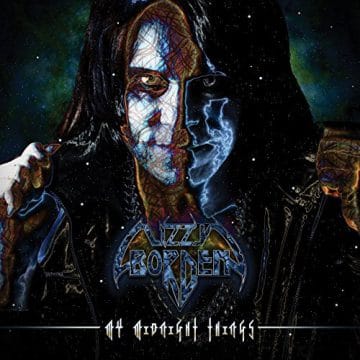 LIZZY BORDEN
MY MIDNIGHT THINGS
To be released on June 15, 2018 (Metal Blade)

Review:
Lizzy Borden was an artist/band that I did not discover until the mid 2000’s. Of course, I still recall seeing many photos of the band back in the ’80s, but with minimal funds as an adolescent, it was hard to buy everything that was being put out. This was long before the days of downloading, which really was a great thing because the appreciation for each release was astounding.

When I finally did discover the band, I was sort of blown away. I found the band’s early work to be darker, with a certain horror appeal to it. The songs were very well crafted and thought out. Of course there was the anthem “American Metal” that fit the times perfectly. As I went back and purchased the band’s catalog, I found myself gravitating towards the two later albums of the genre. Visual Lies featured the great, anthem “Me Against The World.” A song that I still play in heavy rotation today. Then there was the Master Of Disguise album. The title track really took me by surprise. Borden’s vocals were so diverse. It was if Borden was fighting himself within the song, which really put meaning to the title. “Love Is A Crime” was another track that captured the pure essence of this brilliant, diabolic piece of work. Writing a song with lyrical content that deals with the obsession of phone sex was pure genius. What also captured me on this album was the guitar work of King Kobra guitarist David Michael Phillips. To be honest, this may be some of Phillips‘ best guitar playing up to that point. The texture of Phillips‘ excellent guitar tone captures each track perfectly.

Enough of the past, it’s time to move to the future. Lizzy Borden’s latest masterpiece My Midnight Things is set for release on June 15th. It was a true honor for me, as a fan to have the privilege to analyze the band’s latest work.

The title track “My Midnight Things” starts this album off perfectly. If I had to make a comparison, it would be that to the earlier work of Queensrÿche. It could be due to Borden’s precise vocal execution that emulates the late ’80s/early ’90s work of Geoff Tate. It’s funny when I hear this song, I think to myself that Queensrÿche have not put out anything close to this brilliant in years. As I am listening, I hear a progression in Lizzy Borden’s music that captures me even more than on past albums. It really has a sort of pop sensibility to it. Now take that as you may, but by no means has Lizzy Borden toned back on their sound. It’s just a different take on the band’s approach.

“Obsessed With You” has a more modern feel to it. The use of melody and harmonizing on the vocal captures the listener’s attention. “Long May They Haunt Us” has “hit” written all over it. What a truly genius piece of music! It possesses that classic Lizzy Borden vocal tone, but yet again with a certain pop sensibility. I find myself reverting back to this track to hear it all over again. “The Scar Across My Heart” is yet another brilliant track. I am astounded at the diversity within the melody. In terms of songwriting, this song is very well crafted. I like the positive nature that Borden is invoking throughout within the lyric. Now this could be a metaphoric approach, but I love the “I can see clearly now” line in the chorus. To me, that gives the perception of someone who’s dealt with some pain, but is bouncing back stronger than ever. Through the eyes of the artist I can feel what is being conveyed to the listener.

“A Stranger To Love” has a very modern sound to it with the guitar holding the vocal within the verse. The drum line leading into the chorus follows the vocal nicely. “The Perfect Poison” has a very theatrical type of lead in. At almost a minute in, the mood changes slightly as Borden charges forward electrifying the pre-chorus into the catchy chorus. The mood swings back to the theatrical, which once again leads into the heavy laden portion of the song. Dynamically, this song is precise and to the point. It possesses a stage ready presence where you can picture in your mind how Borden would possibly convey a certain persona in a live setting. “Run Away With Me” shows a soft side initially as a piano and synthesizer his heard beneath Borden’s harmonizing vocal. What I have always found amazing about Lizzy Borden is how his harmonies blend so well together. The use of his voice on its own captures the listener. He is one of those artists that you could listen to his voice purely by itself without any music accompaniment. The pop sensibilities are prevalent once again as the song kicks in. Another dynamically epic composition!

“Our Love Is God” is a heavy, Marilyn Manson type track with a catchy Rob Zombie type chorus. With that said, there is much more depth than anything Manson has ever done. Although I have made the comparison, in the end, it sounds more like Lizzy Borden than anything. It’s just my way of conveying to you how I perceive the song so you get the idea of what to expect. I really dig the eclectic feel of the guitar solo. It almost has an East Indian vibe to it. It paints a very different picture. “My Midnight Things (Reprise)” takes the back to basic approach to this already amazing track. This version breathes freely with piano and a great choir like vocal behind. I love how Borden harmonizes pretty much throughout the vocal. “We Belong To The Shadows” ends off this brilliant piece of work as it should. A very catchy melodic verse leads into a hook laden chorus.

As I contemplate my listening experience, I have to admit that there is nothing on this album that I did not enjoy. I think the word ‘diverse’ really speaks to me on all accounts. It is evident that Borden has embraced many techniques of modern technology to create a different listening experience to that of past albums. The use of instrumentation is very appealing as well. There is much depth throughout every song. I highly recommend that you the reader take a listen to this amazing piece of music. I truly believe that you will not be disappointed.

Order at: http://www.metalblade.com/lizzybordenLizzy Borden “My Midnight Things.”Having signed a new contract with Metal Blade on the strength of three demo …