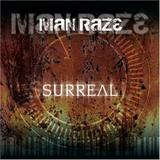 Review:
When you get a band made up of Def Leppard guitarist Phil Collen, Sex Pistols drummer Paul Cook and bassist Simon Laffy (Collen‘s cohort in Girl), comparing Man Raze to those groups is inevitable. If you are expecting to hear Def Leppard you will be disappointed and seeing as Lep have bored me for a while now, the good news for me is that with Man Raze I don’t hear Def Leppard. I am however a fan of Girl, so I was hoping for something that sounded more like them. But the fact is that Man Raze doesn’t sound like Def Leppard, Girl or the Sex Pistols. Instead Man Raze blends rock, pop, punk and even a bit of reggae into their sound.

Surreal is an eclectic mix of music with every song sounding quite different. The first two tracks are sort of melodic rock with “Turn It Up” having a punk pop vibe, “Runnin’ Me Up”, although monotonous, has a reggae edge as does “Can’t Find My Own Way”. Even though Phil Collen sounds – dare I say it – a bit like Sting on the mid-tempo “Every Second Of Every Day”, don’t let that put you off because this is probably one of the better songs on the group’s debut album. “Low” reminds me a lot vocally of “Wherever You Will Go” by The Calling, a comparison which again might scare you enough to make you run to the hills, but it’s actually a pretty good song.

Collen has a good and versatile voice while the band sounds like a tight unit and the production is kind of raw which I prefer (as opposed to polished). Lyrics aren’t always that important, but a lot of the numbers on Surreal seem lyrically weak and repetitive, or maybe it’s just the songs themselves that don’t grab me. This is an original offering, but Surreal really isn’t my ‘thing’, but that doesn’t mean it’s horrible and it has grown on me since the first spin. In saying that, there are probably only two or three songs I would bother listening to again, the rest are rather forgettable. If you like diversity in your music, with a vast range of styles and influences, Man Raze might hold your interest more than it did mine.