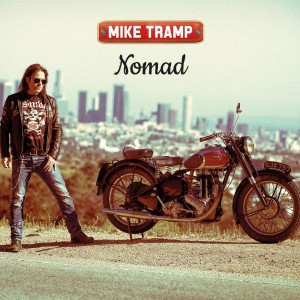 Review:
I have always liked Mike Tramp‘s voice which I have found to be unique and distinctive dating back to his days in White Lion. Tramp has always possessed a very unique voice which helped to distinguish White Lion from the pack back in the ’80s along with guitarist Vito Bratta‘s guitar sound. In recent years, Tramp has been playing acoustic live gigs playing some of his solo material along with of course White Lion material. For anyone that has attended those shows, Nomad will not be a surprise in any way because the album continues in that rather mellow vein albeit with a band this time backing Tramp up.

Although Nomad is billed as a “rock album,” I find it closer to what Tramp plays in his live acoustic shows than a full on rock and roll album. In fact, the album has a country feel to it at times. For the most part, I usually hate country music but with the organ sounds used throughout the album, Nomad has a more ’70s meets adult contemporary sound overall than country flavour to it. Interestingly, a lot of the songs could have easily been a lot heavier with crunchy guitar riffs such as “Wait Till Forever” and “Counting The Hours.” While I would rather have Tramp adopt a heavier musical direction, I have come to accept that this is not where he is at this point in his life. As I have come to expect, Tramp‘s lyrics have a lot of perspective and thought behind them and are worth listening to in order to try to understand the messages that he wants to convey.

My favorite tracks are definitely the harder rocking tunes — and that is a stretch to call them that — such as the opening track “Give It All You Got” which is pretty upbeat compared to some of the other tracks, “Wait Till Forever” which could have been a lot heavier but still works, and “Who Can You Believe.” A couple of tracks that I could live without are the two last ones, “Live To Tell” which I find lacks a good melody and “Moving On” which is simply too slow for my hard rock taste.

What sets Nomad apart is simply Tramp‘s voice. If you like Tramp‘s voice and acoustic gigs, you will most likely like Nomad. In fact, I think that most of the songs on Nomad would fit well alongside the acoustic or slowed down versions of the White Lion classics that Tramp has been playing live and that is really a compliment and a testament to the quality of the songs on Nomad that they match up in that regard.

Mike Tramp – Give It All You Got (Official Music Video)

Mike Tramp – Give It All You Got (official music video)Taken from the album “Nomad” out 28th of August 2015 on Target Records (www.targetgroup.dk).Video dire…