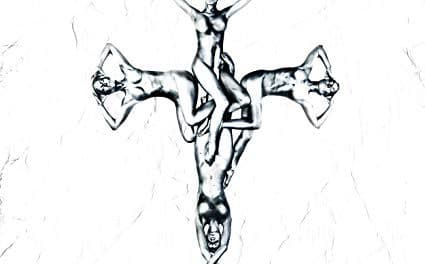 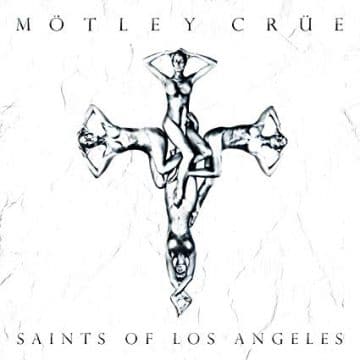 Review by Ruben Mosqueda (June 24, 2018):
Mötley Crüe called it a career at the tail end of 2015 right where things started in 1981 on their home turf — Los Angeles. There’s no question that Mötley Crüe are a lock for the Rock & Roll Hall of Fame. It’s just simply a matter of time before they get a nomination. Mötley Crüe’s influence was seen in the countless ‘Mötley clones’ that popped up in the mid-’80s through the early ’90s. Mötley Crüe in their 30+ year career have become a new generation’s classic rock. Mötley Crüe issued what would become their ‘final’ studio effort in 2008, the album was Saints of Los Angeles, which was launched with the album title song.

The song was a catchy, contemporary rock song that was slick as black ice. Mötley Crüe toured extensively behind the album and even put together ‘Crüe Fest’ which was held throughout North America with Buckcherry, Papa Roach and Nikki Sixx’s [then side project, which later turned into full-time project] Sixx A.M. The tour was a moderate success, the album wasn’t. Though, that might have been due to the fact that by 2008 the music business was in a downward spiral as ’fans’ didn’t buy albums, like they once did. So, on the 10th anniversary of this often maligned final record from Mötley Crüe, we’ll take a look back on the album.

Right from the beginning, there’s been speculation, almost from the get go, that the team that recorded Sixx A.M. albums were the players on Saints of Los Angeles — that being Nikki Sixx, DJ Ashba (guitars) and James Michael (background vocals) and probably drummer Josh Freese sitting in for Tommy Lee for the majority of the recording sessions. That leaves only one other original member on the entire record and that of course is frontman Vince Neil. The album was to serve as the soundtrack to the Mötley Crüe biography The Dirt which as you know now, going to be a Netflix feature film. The album as a whole is a mixed bag of highs (“Saints of Los Angeles,” “Down At The Whisky,” “The Animal In Me,” “This Ain’t A Love Song” and “Just Another Psycho”), lows (the cringeworthy “Mutherfucker of The Year,’ the abysmal “White Trash Circus,” the pedestrian “Chicks = Trouble”) and the forgettable (“Face Down In The Dirt,” “What’s It Gonna Take,” “Welcome To The Machine” and “Goin’ Out Swingin’”).

All in all it wasn’t a ‘great’ record but in the Mötley Crüe catalog fared better than Generation Swine; Girls, Girls, Girls; and, New Tattoo. Now you might be asking, “Yeah but what about Theatre Of Pain? Well, in this writer’s opinion, that was a ‘better album.’ That record featured ‘hits’ such as “Smokin’ In The Boys Room” and “Home Sweet Home.” There were some ‘better’ deeper cuts that were great too such as “Keep Your Eye On The Money,” “Louder Than Hell” and “City Boy Blues.” In another ten years, Saints Of Los Angeles will be overlooked much like Van Halen’s A Different Kind Of Truth, Aerosmith’s Just Push Play, Guns N’ Roses’ Chinese Democracy and KISS’ Monster. Why? Well, because they weren’t that good, and it’s not the records that people have a connection with or that people get nostalgic about. It’s sad.

Review by Justin ‘Crash’ Crafton (June 2008):
It’s been eleven years to the day since the original members of Mötley Crüe issued a new studio album (Generation Swine was released on June 24, 1997), and man have they delivered! Lyrically based on their autobiography ‘The Dirt‘, this album drips of sleaze, filth, sex, drugs and rock n’ roll! This 13 track album really gathers all the things the Crüe are best known for and combines it into a cohesive platter, something fans will be rejoicing about for awhile to come. The thing I am most happy about is you can taste Mick Mars‘ stank all over this album, and Mötley Crüe can only benefit from more input on any level from him. Mick has seven co-writes and his unmistakable playing stands out like it should.

This is the best album Mötley Crüe has released since 1994’s offering with John Corabi. The similarities between the greatness of MC ’94 and Saints Of Los Angeles are the injection of fresh-blood into the writing mix. In 1994, it was John Corabi and now it is James Michael, D.J. Ashba and Marti Fredrickson, as well as Mick Mars‘ input.

The album starts off with “L.A.M.F.”, an intro in the vein of what the band did with Shout At The Devil and Dr. Feelgood. From there it is balls to the wall with “Face Down In The Dirt”, a song recounting a kid’s early dreams of making it as a rockstar, which features some ferocious punk-flavored drumming from Tommy Lee. “What’s It Gonna Take” is a mid-tempo rocker that features one of my favorite guitar solos on the album, albeit short, it gets the point across with some nasty wah-wah riffs and dive-bombs that are classic Mick Mars. “Down At The Whiskey” is my favorite cut on this album. It is a borderline ballad that kicks in at the choruses and Vince Neil really shines vocally here. “Saints Of Los Angeles” was the first single released from the album and while I like the track, I think they could have picked a better single. “Mutherfucker Of The Year” is pure groove and very reminiscent musically of “Sick Love Song” from Red, White & Crue. It has very demented vocals and some of Mars‘ best fretwork lies within this cut.

“The Animal In Me” has ‘hit’ written all over it. You can feel the Sixx: A.M. influence all over this track and Vince sounds better than he has in years. Imagine Sixx: A.M.‘s “Life Is Beautiful” crossed with Vince‘s last solo single “Promise Me” and that’s what I get out of this song. Tommy‘s drumming before the solo is outright insane and Mick lays down a solo that really adds to the song. “Welcome To The Machine” reminds me of early Crüe as it is fast paced and full of punk attitude. If you dug the drumming on “Kickstart My Heart” or “Smoke The Sky”, then this track will have you beating the shit out of your dashboard as you head down the road. “Just Another Psycho” is stellar musically as Sixx really lays in the pocket and puts down a groove, I’m not too fond on the lyrics though.

I feel “Chicks = Trouble” should be the second single for a multitude of reasons. For one, Mötley Crüe‘s fan base is predominately male and we can all relate to the lyrics here. Secondly the track is full of hooks from top to bottom — the censors will have fun with some of the lyrics though. A full on rocker, it is probably my second favorite tune on this album. Another groove-laden track, “This Ain’t A Love Song”, is another potential single. If you are a fan of tracks like “Primal Scream” and “Sick Love Song” as I am, then this is right up your alley with some beautiful slide work added into the multi-dimensional solo. “White Trash Circus” sounds eerily close to Skid Row‘s “New Generation” as the lyrics are Mötley‘s career summed up in two minutes and fifty-one seconds. The album ends with the track that caused Saints Of Los Angeles to be delayed by a week, when at the CrüeFest press conference, they wrote this cut and re-entered the studio to add it to the album. It is the perfect bookend to S.O.L.A. as an album. It really displays the Crüe attitude of continuing to forge ahead and not going down without a fight. Some fans have wondered if this song means the band are done and that this is their swan song. I doubt it, I think Mötley Crüe is finally back as they should be!

Reviewed by Justin ‘Crash’ Crafton in June 2008 and Ruben Mosqueda in June 2018 for Sleaze Roxx.

Motley Crue – MF of the Year