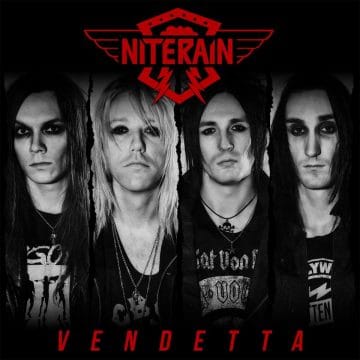 Review:
Niterain have finally returned with their sophomore effort Vendetta. This is a rather interesting band who like all their Scandinavian peers started off by publishing a couple of tracks on Myspace (jeez, you remember that?) and releasing their debut Crossfire in 2013. It’s nice to find a band that seems to be unapologetically obsessed with crafting the kind of catchy, sleazy hard rock that I and many of the readers of Sleaze Roxx look for. And if that description fits with your tastes, then Niterain might the epitome of this approach to rock.

Niterain went on to achieve success through relentless touring, being invited to play Rocklahoma 2016 and earned the #1 spot in voting among 25 bands from around the world in order to secure a spot in the prestigious 2016 Sweden Rock Festival. It also didn’t hurt to have a thundering debut album for which Sleaze Roxx commented, “NiteRain is a Norwegian outfit who really nailed it on their debut effort Crossfire. Sounding much more mature than a debut album, Crossfire boasts a polished sound alongside clever lyrics and song structures that demand a place in the current hard rock scene. The album also showcases monster riffs, infectious hooks, and strong melodies delivered with the confidence of an experienced band.”

Vendetta continues where Crossfire left off but with shades of some evolution to their songwriting. Niterain have confidently stepped out of the shadow of Mötley Crüe while keeping their songwriting to a purposeful bombastic high tempo with an obvious emphasis on their signature melodies and harmonious backup gang vocals. This is evident right from the first track “Lost And Wasted” that sets precedent for the rest of the album. There is however one attempt at a ballad in “Don’t Fade Away”, albeit a more peppy type that once again showcases Niterain’s capacity for diverse songwriting.

Some more high points on Vendetta are the grinding “Come Out” featuring more of Niterain’s suck-you-in catchy song structures, and “Rock N’ Roll” which the band released as a video single last year and really showcases the powerful tenor growl pipes of lead singer Sebastian Tvedtnæs. The album’s title track, “The Threat” and “#1 Bad Boy” all serve as scorching exemplifications of what Niterain are all about — fist pumping to shredding guitars and solid pounding back beat. Vendetta also comes to us with great sounding big production quality. This is going to sound great in your car or home system!

Now that Niterain are back, we are eager to see what new heights the band can reach with Vendetta. This album is a consistent source of fun from start to finish.