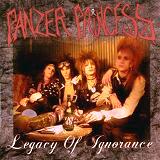 Review:
All the way from Sweden (where else?) comes the latest group of heavily made-up, big haired outlaws trying to make their way to the top of the ever increasing sleaze rock pile. Panzer Princess mixes Hanoi Rocks glam with Faster Pussycat darkness and mix in Junkyard style vocals for a hell of a combination.

One of the band’s opening lyrical lines is “what the hell is wrong with me”, and musically the answer is – nothing. Panzer Princess sings about rednecks, fags and losers with a sure-of-themselves cockiness and a fuck-you attitude. Being a four song EP, everything is coming full-blast ahead and the 15 minutes it takes to spin Legacy Of Ignorance fly by in no time.

“Get Off My Back” starts the ball rolling with a cool drum beat and even the addition of a harmonica. From there it is on to “Bumville Judge” and “Rob The Bank”, both of which have a chugging rhythm that compliments the retro guitar work and make for exceptional rock songs.

In an effort to get their name out there, Panzer Princess have offered Legacy Of Ignorance as a free download on their website. You’d be ‘ignorant’ not to give these guys a try, and after listening I dare you to say that no new bands are capturing the sound of the decadent 80s – because Panzer Princess has.