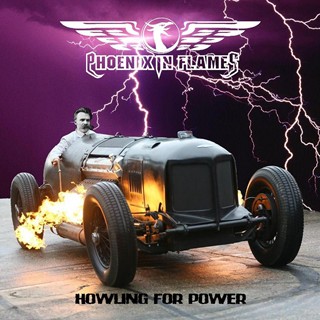 PHOENIX IN FLAMES
HOWLING FOR POWER
Released on August 1, 2014 (Phoenix In Flames)

Production:
Produced by Phoenix In Black.
Mixed and mastered by Francis Perron.

Review:
A heavy blues based band — that is the best way for me to describe Montreal based Phoenix In Flames on their second EP Howling For Power. Once I got over the fact (but still don’t want to accept it) that none of the songs pick up much speed from the cool guitar and bass riffs that sometimes open them, I was able to appreciate and find some good moments on Howling For Power.

The EP’s opening track “Wolf’s Lair” starts off with a strong and promising guitar lick but is followed by some rather disappointing growling/singing from frontman Cornelius Black during the verses and ends up being a song that never really takes off. At least the opening riff eventually creeps back in, and with no more singing, leads to an enjoyable finish. “What’s Her Name Again” shows a surprising, but welcome, funk side to Phoenix In Flames before the band takes a complete left turn by losing the funk element for a while, eventually leading to a subdued “wo oh oh oh oh” chorus. It feels like the Canadian rockers had two musical ideas that they tried to link together, but it would have been better to simply create two different songs.

By the time “Face The Fact” comes on, my main thought is that Phoenix In Flames would be much better off with a different singer that could carry the songs. Perhaps Cornelius Black should just concentrate on his bass duties and leave the singing to someone else. When you’re playing songs at a slower pace the lead vocalist’s role often takes on more importance since the songs end up living and dying with how good the singer’s voice is. The reason that frontmen such as Jorn Lande and the late Ronnie James Dio are able to pull off their slow to mid-tempo songs is because they both have/had phenomenal voices.

The one track where frontman Cornelius Black‘s vocals work well is “Drunken Bar Blues” which has a bluesy and dirty feel to it complete with some harmonica thrown in for good measure. Howling For Power then closes with “The Will To Power”, whose bass lines remind me of the melody in Michael Jackson‘s “Smooth Criminal”. What sets “The Will To Power” apart from the rest of the EP is that the shackles are finally taken off guitarists Paul Black and Japps — who provide some blistering guitar solos in the second half of the song. It also shows the great stuff that Phoenix In Flames is capable of when they speed things up a little bit.

While Howling For Power has its moments, overall it feels like Phoenix In Flames are still working on how to best harness their musical talents into the songwriting — and a new lead vocalist would really help.